The insider's Guide to Making a Game More Immersive

by The Scout 4 years ago 5 min read

Hey, everyone! My name is Tom Nietfeld, and I am a Level Designer and 3D Environment Artist, but mainly a student from Germany. Looking at games, I always tried to figure out how to make a game more immersive and try to express that through my newly started **video-series**of “Speed Level Designs”.

The goal of this weekly series is mainly to build up a portfolio and present my work, but of course also to get better at compositing and level design by receiving feedback.

That is also why I entered The Rookies contest with the hope of winning “Rookie of the Year”.

The Development of “The Maintenance Room”

I always limit myself to only use assets that I already have for my shots. Consisting of my own library and assets from the marketplace. So for every idea that I have for these videos, I try to keep my assets in mind and form the idea around them.

Another important condition is the timeframe that I give myself for these videos. Generally around 3 hours for one video. For some it takes less until I am satisfied, for some, it takes more time.

Usually, when it comes to level design you would use basic shapes to block out your environment before replacing these with final assets. You want to make sure the dimensions fit and follow their function as a game level, before actually designing the level visually.

In my case, I skipped this process due to the limited timeframe and used the final assets already in the blocking process. But still I treat the scene as a game. I look carefully and think about what the player would do in this very situation.

I pay attention to the rule of the golden ratio. Since I create the whole scene for only one camera angle I can apply this rule to it which helps to guide the viewers attention to where I want it to go.

At this point I also do a first rough lighting to support the composition. Light is a massive instrument to steer the player through your environment without him noticing.

I differentiate between environmental lights and gameplay relevant lights. 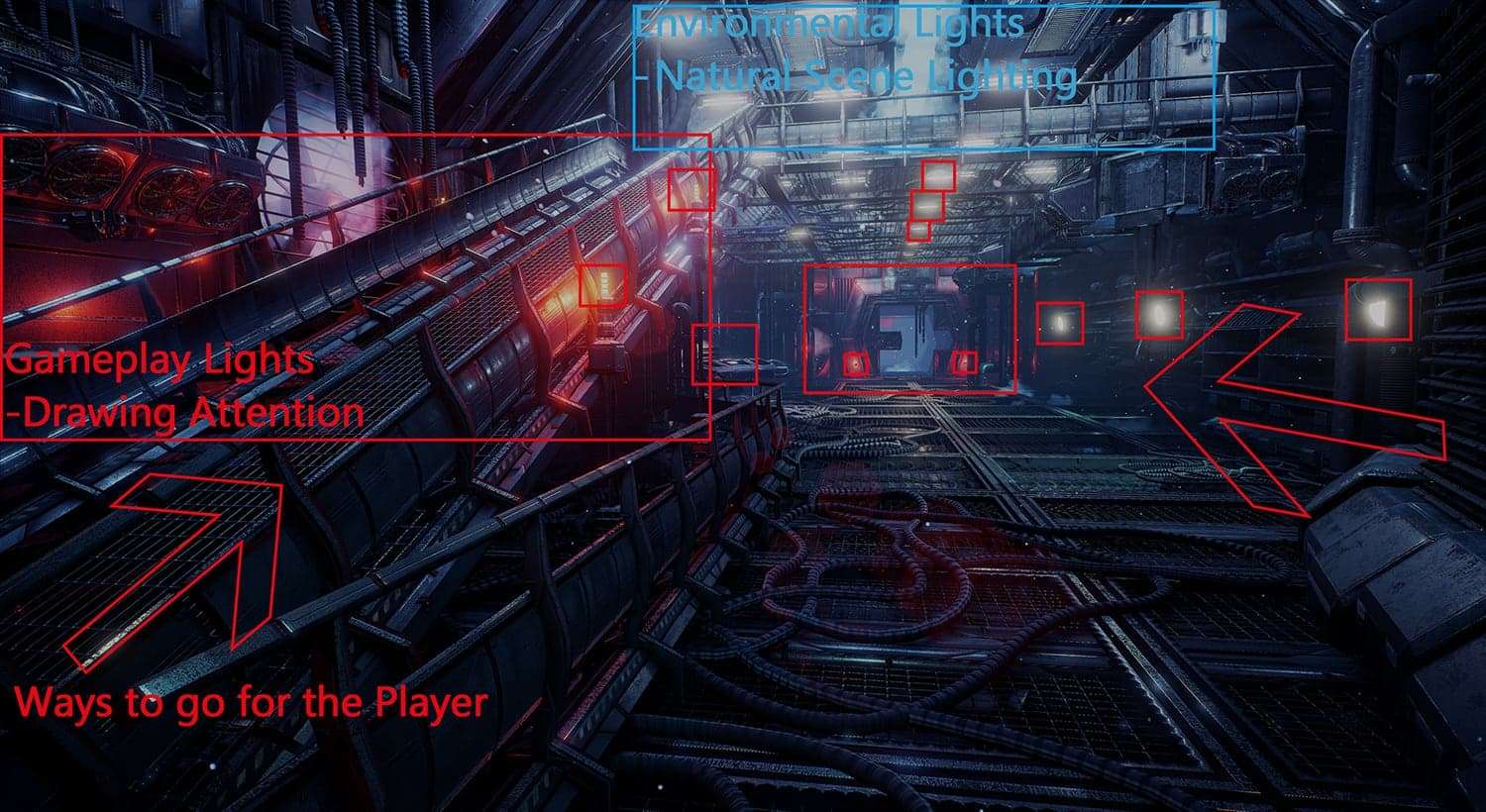 The gameplay relevant lights are supposed to catch the eye of the player as they stick out and are not naturally given for the environment. In this case, the red lights highlight the ramp going to the second level attempting to lure the player up there before he continues towards the other red lights that will lure him into the next corridor.

The yellowish light on the lower level is another way to lure the players attention towards the exit of the room and the next corridor.

Now the room is pretty much set and I can start placing detailed assets to make the scene more immersive. These assets serve mainly to create immersion and make the whole scene more believable. For example the pipes along the wall, the air vents, the cables on the floor. The air vents also help to create the feeling, that there is more to this level and more rooms and corridors to explore. On top of that, they create

On top of that, they create movement which is along with the particles like dust and fog the only source of movement I have an interior like this. Moving objects are today’s standards for every immersive level since they will prevent the scene from looking dead and unnatural. Falling leaves, moving water, wind on foliage are great outside examples for that.

Together with the detailed assets I start detailing the lighting mainly to light up areas that are too dark and to fix up any issues that will destroy the immersion or highlight little bits and pieces that I like about the interior and want the viewer to see.

As I move along with the level I will often notice that things won’t turn out to be as I want them to be. For these cases I try to figure out what and why and of course how to fix it.

What is wrong in this case and why?

The ramp going that direction takes too much of the camera view and creates chaos. You can see this chaos by looking at the highlighted lines. It is unpleasing to look at and does not make sense in this environment anyways as it takes way too much space of the room and would totally be in the way. And let’s be honest the engineer who puts the ramp like that into my spaceship would have been fired immediately.

So how to fix it?

As the Ramp is very important gameplay-wise, since I want the player to go up there and explore before he continues it takes almost a third of the screen now, but does not take this space off the other main focal point ( the existing corridor ), but the left wall which did not have any purpose before anyways. It also clears up the lines and makes the whole scene way more readable to the viewer.

To get the red lights to stick out even more, I emphasized the color values towards the complementary colors (orange – red) against (light blue – dark blue) I also adjust exposure, contrast and brightness making use of the color lookup table within the post process volume. 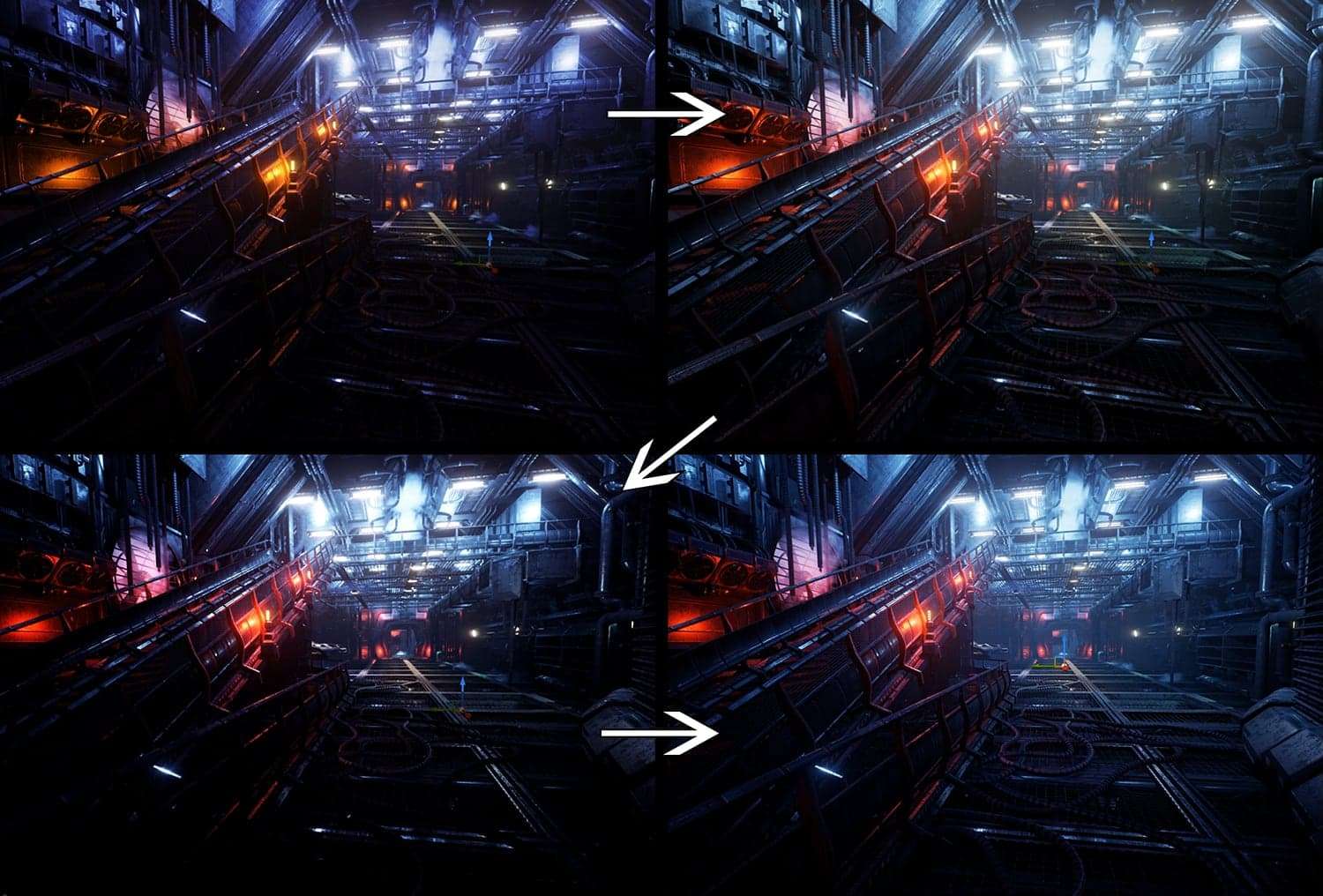 In the end, I cut all my recordings in After Effects, do some dolly shots and put everything together into a new Episode of my Speed Level Design Series.

As this is the first Article of this kind that I write I want to say my special Thanks to Epic Games and their amazing work on Unreal Engine! I cannot even find the right words to express my gratitude towards them! (Fanboy spotted).

How to Create a High Quality Game Production Asset