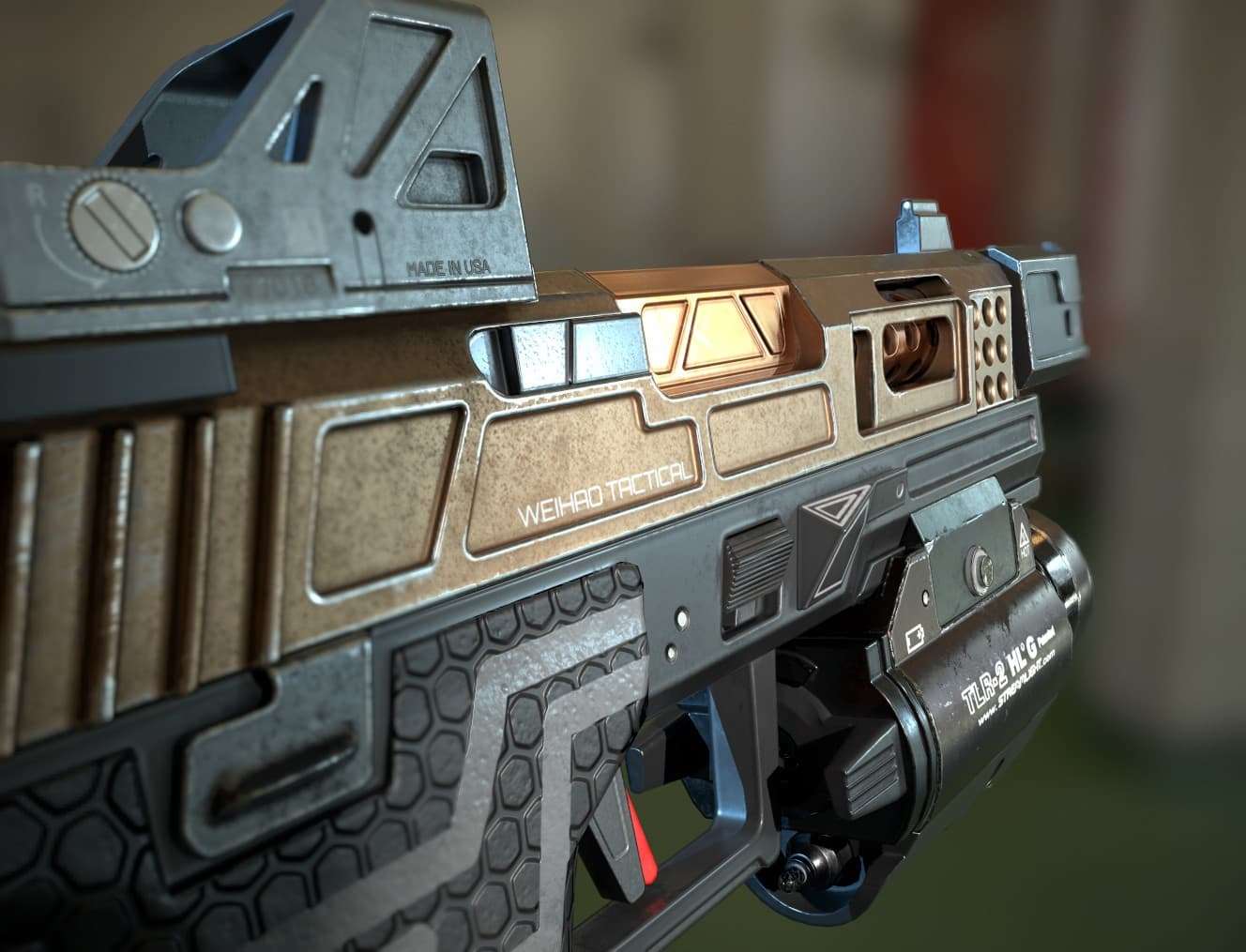 Game designers love fps guns. They love building them, they love designing them, but most of all they love dropping them into their favourite game engine and blowing things up - or off. Pretty much every wanna-be game artist has tried to build a fps gun. We have seen some

Game designers love fps guns. They love building them, they love designing them, but most of all they love dropping them into their favourite game engine and blowing things up - or off.

Pretty much every wanna-be game artist has tried to build a fps gun. We have seen some epic guns submitted over the years to The Rookies, so we thought it would be a good idea to share some tips for how these artists created such a fierce armoury.

There are two important aspects of creating a weapon design that I hold dearly. The first is that you need a huge amount of research for visual aid and understanding. When I created this pistol, I was looking at a lot of real-life references and I would take note of their inner workings. This knowledge would then be used to apply to my own design, figuring out its functionality through iteration.

The second is world-building. To create an effective design, it’s crucial that you keep asking questions about the world which would influence the weapon.

For example: What resources are available in this world and how would this effect the weapon structure, build material, ammunition etc? How advanced are the people using this weapon? Is their personality or society more about functionality or style? The more questions and answers you determine, the more you can narrow down an awesome design.

Regarding my way of working, I think it has changed a lot since I created this fps gun, but if we had to keep three words to describe this weapon it would be: patience, rigour and precision.

In terms of approaching the UVs, my best suggestion would be to check out Paul H Paulino tips  and that of an excellent concept artists Eddie Mendoza.

As far as advice for creating a fps gun like this goes, it would be fair to say you need a lot of passion, imagination and perception. Personally I like to do a lot of research about how guns work today, and even try to think about how they could work in another universe.

This project was one of my first 3D projects I completed about a year ago. I used Autodesk Maya which is a great tool as it allowed me to let my imagination run wild.

For this project I first blocked out a small gun idea in Autodesk Maya knowing it would change quite a bit and then took that into Zbrush so I could easily pull and adjust different forms using the snakehook brush.

Once I had a shape I liked with the heavily distorted blockout in Zbrush, I dynameshed the blockout which gave me cleaner topology to push around and experiment further with different forms.  Working in Zbrush like this allowed me to get a good number of design variations as I would just make changes, duplicate the mesh and continue while continuously going back and comparing to previous versions.

Using Zbrush also lets you easily get nice curvy organic forms by pushing and pulling with the Snakehook brush.  This was important because one of the influences for this design comes from Dye paintball guns and transportation design sketches which feature the same sleek and curvy design. Once I got the overall shapes in place, I dynameshed at a higher resolution and cleaned the sculpt a bit more with the H-polish and Dam-Standard.

I then decimated the sculpt and brought it into Autodesk Maya to retopologize with the quad draw and finalize the forms with clean topology.  When retopologizing in Maya I tried to use as few polys as possible making it easier to adjust each part and ensure they fit well with the other pieces.

To streamline modelling in Autodesk Maya, I highly recommend making a custom shelf with tools you use often like mirror and merge as well as setting up hotkeys for tools like target weld, multi-cut, and Isolate Select.

If I had a top tip, I’d say it would be to study the construction, usage, and function of any weapon that you are planning to build. If you understand how it is put together and is utilised, you’ll have a much easier time modeling it, understanding how to texture it, and achieve better realism in your final renders.

Always model from reference, even with sci-fi weapons you want to base it off of real world objects. Grounding any weapon in reality will make the concept much more believable.

Keep in mind the purpose and function of the weapon. With any weapon, it needs to look like it does what it’s supposed to do. Moving parts; bolts, triggers, and springs all need to look like they actually function. This is especially important if the model is intended for first person perspective. Which brings me to my next point...

Keep the viewer in mind. Details need to hold up at close scrutiny. Portfolio pieces should always show off your abilities but if designing a weapon around a genre be ready to model it appropriately. While third person perspective games can get away with lower resolution and lower polycounts, if the player will be able to see it up-close you will want all that detail to hold up.

Story is very very important. History is important because it will tell the story of the weapon. Have pieces made of different metals so it looks like it had been replaced over time. Have things include wear and tear to show it’s been used. Carve an initial or phrase into the wooden stock. Have a second magazine taped to the first for quick reload. Mint condition guns can look cool, but are overall underwhelming. Unless it is hyper futuristic and has a notable feature to it, mint condition guns aren't very interesting, at least in my opinion.

Model everything on your high poly. While floating geometry is quick, normal bakes can come off skewed and not look as clean. Modeling everything you can into your high poly will give you much better results in your bake.

Make corners on your high poly loose enough to be viewable from a distance. Keeping edges tight and crisp may look realistic on a high poly, but once you bake onto your low poly geometry you’re going to lose it while viewing from a distance.

When creating your low poly, avoid faceting on round edges. The extra geometry on those round surfaces will make all the difference.

A good rule of thumb with low poly modeling, if the geometry doesn’t support the silhouette, get rid of it. If the geometry isn't affecting the overall silhouette of the piece, it is not needed and will save you some geo on more important pieces of the model.

I have a passion for firearms and how they function so I do what I can to make my models as accurate mechanically as possible. Usually I'll use Zbrush's live booleans and Zmodeler to make a high-poly model with each individual part seperated out. I then retop in Autodesk Maya and combine parts into their working groups.

I always texture in Substance Painter and go from there. Pretty standard workflow but there's a million and one ways of doing anything 3D related.

I'd say if there was one big tip I could give ti would be that reference is the most important part, you can make a cool looking model but if the measurements aren't right or the parts don't line up it'll fall into the uncanny valley of *almost* right, but not quite.

Thanks for all the amazing contributors to this fierce lesson in making guns for fps games. Please help us thank them by visiting their sites and checking out their latest work. It's totally worth the time! 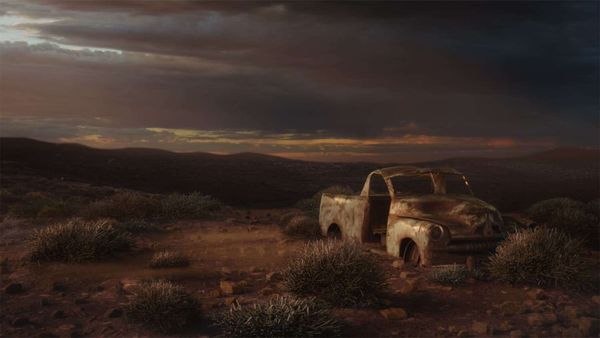 My name is Emma Wittwer.  I am the blessed recipient of two scholarships via the Rookies in 2018:  Visual Effects – Rising Sun Pictures and University of South Australia and Visual Effects – CG Spectrum. "Success is the progressive realisation of a worthy goal."  - Earl NightingaleBelow I talk about my personal 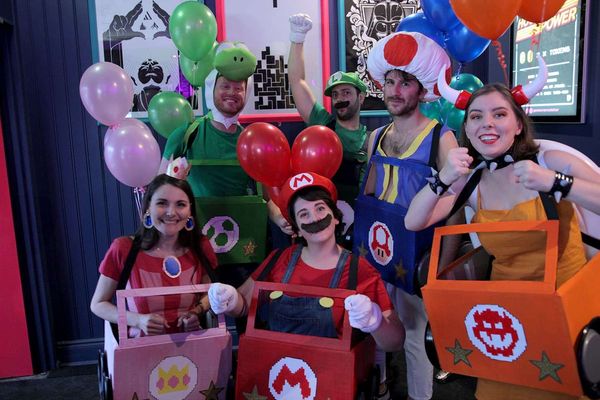