The secrets behind making an award winning short film - The Albatross

by The Scout 5 years ago 9 min read

The Albatross is a 7-minute student short film made by Alex Karonis, Alexander Jeremy, and Joel Best. This is our first effort at making a substantive film, full of cuts and characters, and a thing called a story. After working on it for over a year, we are excited to share our efforts with the world.

The smoking sailor you see above is the main character of our film. We call him Hayden, and he is inspired by the real story of an incredible man named Sterling Hayden. For the film buffs, you might recognize him as the commie-hating General Jack Ripper from Stanley Kubrick’s Dr. Strangelove, or as the ill-fated Captain Mcluskey from The Godfather (the guy Michael shoots right between the eyes in the restaurant).

While his contributions as an actor are interesting enough, Sterling Hayden was a fascinating individual; a sailor, soldier, actor, activist, writer… But above all these facts, he was charismatic and unique, something we can’t put down in words.

Look him up on youtube, watch his old interviews with Tom Snyder, and try to get a hold of a lovely old documentary called Pharos of Chaos, created in 1982 and directed by Wolf-Eckhart Buhler, which is almost 2 hours of incredibly candid discussions with Sterling about his life. It will be worth it.

We knew we had a great basis for a character and a story with this reference. We were already talking about making a film set in the Arctic, about a character alone lost in a boat, very much inspired by The Rhyme of the Ancient Mariner.

As a small team, we were always conscious of the “do-ability” of our film, and were looking for ways to keep the workload manageable

This is an archetype we were drawn to for its visual appeal and its relative simplicity in terms of set design and world building (as a small team, we were always conscious of the “do-ability” of our film, and were looking for ways to keep the workload manageable from the get go). The story of Sterling Hayden and his troubles with alcoholism, fit perfectly into this archetypical narrative but also gave it some individuality.

In about March of 2015, we only knew three things about our story. It was about a guy dealing with a problem alone on a boat, it was cold, and he was going to meet himself in some form. We went through many iterations that played with these ideas. We weren’t very good at storyboarding, so we had to start making 3D animatics very early. This was a total crash course in editing and storytelling.

As time went on we slowly started to create key sequences and events, as well as adding the character of the bird, and the specific problem our character was dealing with (his addiction). The only shot that endured all these revisions was the opening shot of the bottle sinking to the ocean floor, an enigmatic shot that we always loved.

I suppose we would define the early months of 2015 as pre-production – but as students making our first film, the development timeline was not so clear. It’s difficult to breakdown the production into a neat chronological evolution because we were amateurs and didn’t know how to do it properly.

The months of March to June were defined by developing our central 3D asset (Hayden), and trying to lock in key story sequences with our animatics. For example, a big shake-up occurred in early June when we decided to change the central story engine. Originally, the character would start the story heading out into the ocean to dump all of his alcohol, now the story was going to start with a simple fishing trip, and his decision to take too much booze with him would create the conflict.

A big moment for us was when we decided to use Sterling Hayden’s actual voice to deliver the performance of the glass man. This came about because we wanted to capture his individuality, and his method of speech was something we simply could not replicate. After contacting Wolf-Eckhart Buhler (the director of Pharos of Chaos) and receiving his blessing, we created a big library of lines from Sterling, so that we could build a narrative around it.

Hayden was the most complex asset in the film, and most of our time and love went into creating him. We wanted to go for a high-end 3D look, something that looked tactile and well worn. After many ZBrush sculpts, we settled on a design that we thought captured Sterling and would give us the performance we were looking for. That design then went through many iterations as it was pushed between ZBrush and Maya, refining the shapes and topology as we went.

It was hectic, and we had never worked so hard in our lives.

The biggest challenge on Hayden was his hair. We had been warned many times of the dangers of 3D hair, and after our first feeble efforts, we almost gave up. But we endured, we pushed through, and with the help of GMH (A handy polygon to hair script) for Maya, hair sculpts in ZBrush and Pixar’s Renderman, we managed to bring Sterling’s glorious messy hair to life. Then we used Maya fur and Rendermans PxrMarschner hair to create the eyebrows and stubble.

Joel doesn’t like to talk about fur though; it makes him angry. Don’t ask Joel about fur 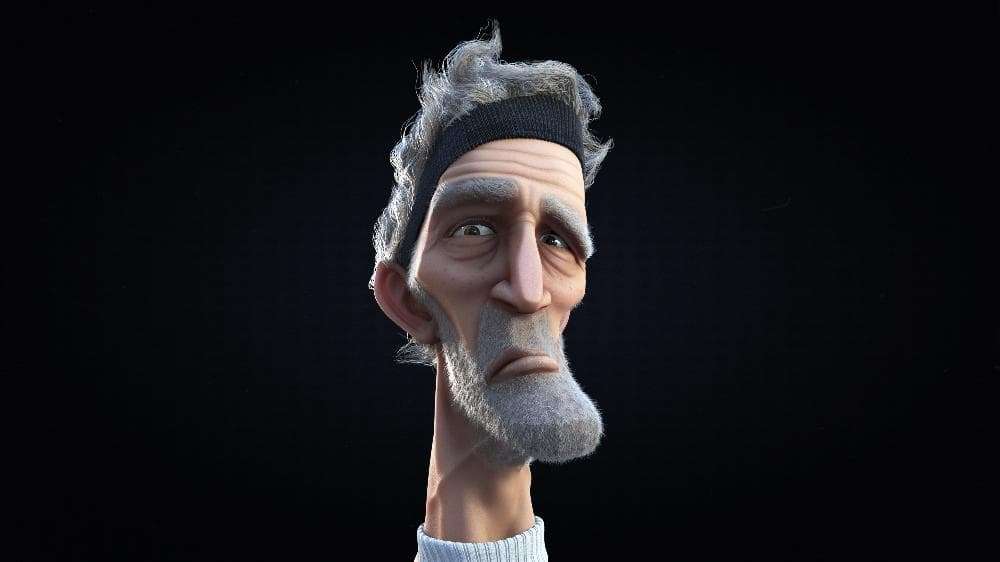 The hands and fingers had almost as much attention as the face – Sterling Hayden’s hands are so expressive and delicate, which is something we wanted to translate into our film as much as possible.

To rig the characters body we used Rapid Rig Modular as a base (awesome script for Maya by Dustin Nelson), This script gives you an easy setup to build and modify rigs for a number of different character situations, we used this as a starting point and then stripped out all the stuff we didn’t need and added in custom rigs on top including all the facial/cloth/hair/fur elements. Overall this was a huge time saver rather than rigging everything from scratch.

Another big part of the rigging pipe was SHAPES by Braverabbit, SHAPES awesome tool for creating and editing blendshapes, creating blendshape combinations and managing it all.

This was the main setup for the Haydens facial setup, using driven keys to control blendshapes and then combining expressions to make a robust facial rig.

Sterling Hayden was such a good reference for character animation, he is full of quirky gestures and fun idiosyncrasies, and we had almost 2 hours of footage of him! Whenever we had the chance, we put as much as as we could into bring his character to life through our performance.

When we were making our schedules in the early part of the year, we kept defining Previz and Animation as two separate entities. We thought we would lock in our layout, and then have a defined period of animating these setups. The truth is that on this short film, animation and previz were almost the same thing.

Our story was constantly evolving, we were taking bits out, slotting new shots in, and animating things as we went.

This means that some shots animation were finalized in late June, while some were still being animated right up until the last minute. It wasn’t efficient, and it required a lot of hard work, but it was our way of dealing with the reviews and advice our teachers were giving us, as well as responding to our own critical input on the film as we saw it develop. It was hectic, and we had never worked so hard in our lives.

Alex Karonis insists that the huge amount of empty whiskey bottles amassing around his desk during this period were “Just for reference, man.”.

We designed him to have sharper-more aggressive edges, but to also look fairly brittle. Making the Iceman look like a tempting, dangerous figure was very important, but we also wanted to show this character as piteous, a little manic, and vulnerable.

To create the Glass man we used the quad draw tool in Maya to draw shapesover Haydens face and create a likeness then extruded and twisted these aggressive shapes into one another. His texture was built by generating an edge map in Substance Painter and using that map to mask layers of texture and roughness in Rendermans glass Layered Material shaders.

We decided very early we were going to have an ocean in the film. For a while we had no idea how to do this, did we have to simulate an entire ocean? We experimented with a few options, Bifrost in Maya, the Houdini Ocean toolkit, and so on. In the end, Renderman came to our rescue with it’s inbuilt AA Ocean Shader, which provided an animated displacement map that was perfect for us.

The fog was something that we wanted in the film too, it seemed like a nice visual theme to go along with the misty ocean idea, as well as a way to reflect Hayden’s mental state. As the film progresses, we liked the idea that it would get foggier and change colour as the Glassman “gains power”.

After doing a serious crash course in NukeX, we did all of our fog in compositing. We used holdouts and depth channels in various combinations to layer our fog into the scenes, tracking it onto the horizon and pushing smoke footage through different layers. The result was convincing and much cheaper than rendering actual fluids in the scene. Alex J is still upset that we didn’t render the actual fluids, though, despite the fact it would mean our film would be rendering for another three years.

For liquid simulation, we used both Bifrost and Realflow. Bifrost was new in Maya at this point, so we spent a lot of time trawling through the official notes and messing with lots of buttons, as well as praying to CG-Jesus that someone would make a tutorial on how to pour liquid from a bottle into a cup (which they actually did, thanks, Peter Gend!).

We also used Realflow for some of the controlled simulations, such as the whiskey pouring down the iceman’s body.

To make the mountains, we used a grey scale height map applied to a plane in Mudbox. Then we export that high-poly geometry to zBrush for extra detailing, exported low-resolution decimated geometry, with normal maps extracted from the high-res geo. We then textured the mountains up with substance painter using procedural masks.

The height map was created by the University of Otago – National School of Surveying who have published it at Koordinates, and is released under a Creative Commons Attribution-Share Alike 3.0license. Special thanks to John Flower for the tutorial.

This film was the first time we decided to composite properly with rendered passes. We also decided that we were going to learn Nuke. It was really interesting to build up a beauty pass from all the different layers and go deep into what makes up an image. The amount of control you have in Comp is also

After narrowly making our university deadline, we then took the film into Nuke Studio for a proper grade. We got a nice 5.1 surround mix and learnt all about colorspace and DCPs. Just don’t ask us to explain it.

If you’d like to reach us, you can shoot us an email at
[email protected]