Work like hell and become the Arnold Schwarzenegger of artists

by The Scout 5 years ago 8 min read

Hello! My name is Hajnalka Szanto, a 3D environment artist from Hungary, currently living in the United Kingdom and who would like to work in the video games industry someday. I always had a huge fascination about stories and how other artists are improving in their own free time, or on their own.

As I am inspired by everything (just like any other artist) and I love the learning process the most, I wanted to make a piece that I have seen many environment artists do, even game environment artists, which is making a picturesque rendered scene.

This is my first time ever been asked to do a tutorial thanks to The Rookies and hopefully, I will be able to show you something new or you can laugh at my mistakes. My main inspiration for this piece was Andrew Averkin`s Far away from Home piece and David Lesperance in general as an artist.

In this tutorial I would like to show the importance of creating your own work next to your studies and how it can help you where to improve next.

This piece started with wanting to learn Maya. As I was doing tutorials about modelling in the (for me) new software, I accidentally found a book about trains: The Train Book at a local shop and I was fascinated by it and I got the idea of making an abandoned train. Thankfully, in
Glasgow, where I was living at that time, also had the Transportation Museum nearby so I could go there one rainy day and gather some photo references.

My biggest mistake was that I did not have anything specific in mind.

As I was learning more and more, I wanted to know how much time I will be given for a certain project in the entertainment industry and thanks to the internet I have found some people online who gave an idea about the general duration of a project and what kind of quality one is required to achieve within that time. I knew if I wanted to succeed I needed to get faster. So I set up a timeframe, two weeks, to complete a whole rendered realistic image of a train from block out to render in Maya.

This was very unrealistic of me at that time considering my skills, but it definitely pushed me to finish projects for a deadline and improved my speed a lot.

My biggest mistake was that I did not have anything specific in mind. I only wanted to learn and push all of my skills as far as possible and make a render in two weeks. This showed in doing unnecessary work such as the interior of the locomotive that never made it to the final piece. 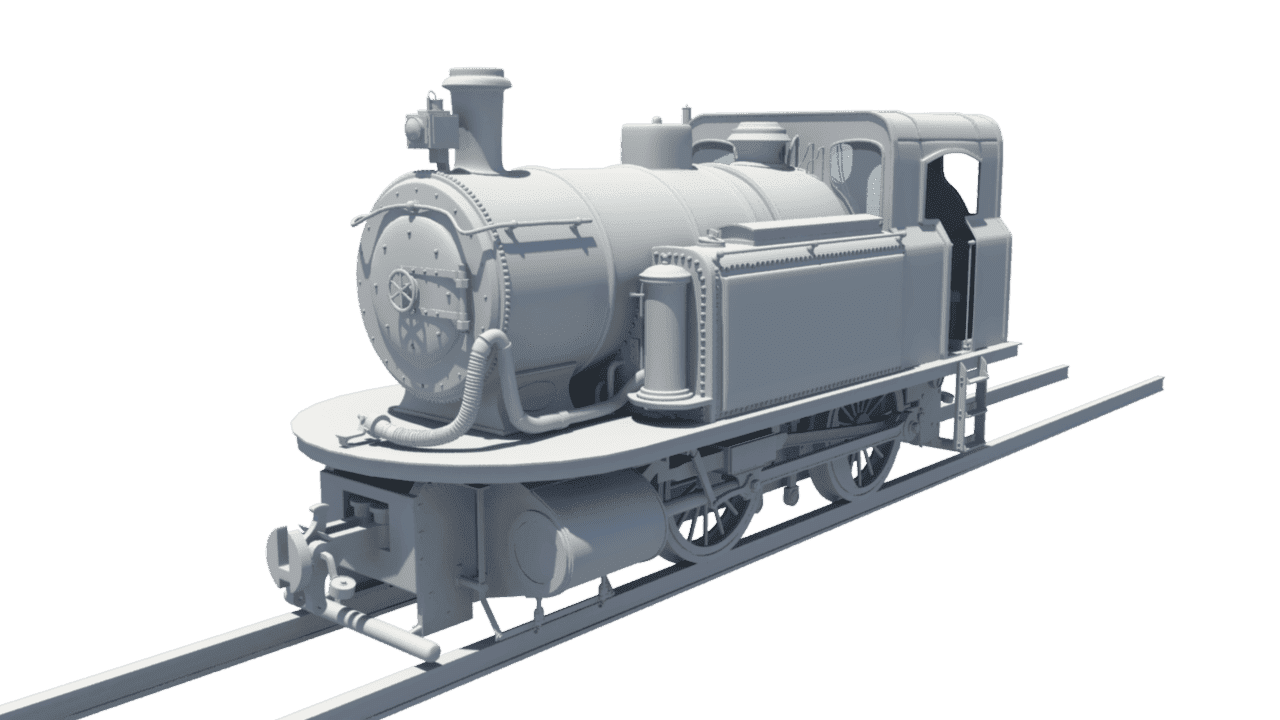 The next step was to use more references and to create a general block out and feel of the scene. I used general modelling tools found in Maya, such as box modelling and using curves. As you can see, I made another mistake of not properly doing an over paint of the 3D block out and I did not get the lighting properly either.

Some parts just did not work in the composition and since I was running out of time and the main idea was to get the train done, I only finished the train itself and I even jumped back to 3ds Max, my first modelling tool that I was most comfortable in, to save time. This is what happened from it:

For the textures I used Substance Designer, and with the fast box UV-ing tool of 3ds Max I was able to quickly unwrap and texture the train. At that time, you can guess, I was also learning **Substance Designer**and I only used a simple noise with some colours on it to get the rusty texture I wanted. For the sky I used a back plate and for the grass I used the Hair and Fur modifier. For rendering, I used **V-Ray**and adjusted the final image in Photoshop.

One of the things I learned that while you are a student, it is okay to slow down and learn at your own pace. 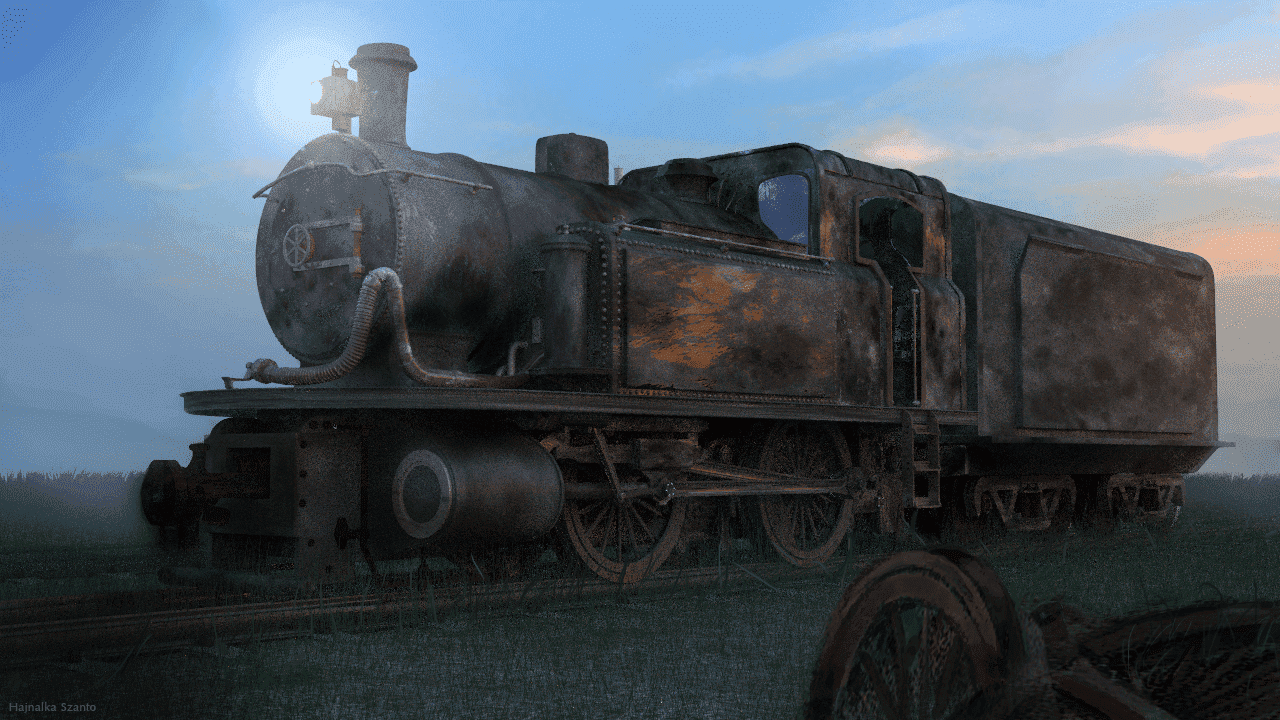 Showing your work to other people

Then it was time to show my work to other people. Sometimes you don`t have the luxury or luck of showing your work to professionals or just in general, getting insightful feedback online, but this time, I was lucky to attend the Industry Workshops in 2015, London, where lot of professionals saw my work and told me what to improve on.

Lots of them said my strongest work was this train piece but it lacked story and therefore looked boring. Nadia Mogilev`s lecture on storytelling pointed me to the right direction and then I knew I needed to respond to all the feedback and come up with a better version of this. I was not aware that responding to feedback would take up so much time, sometimes even longer than you might expect. Life came in and I worked on other projects and I also knew I needed to learn more even if it meant slowing down a bit.

One of the things I learned that while you are a student, it is okay to slow down and learn at your own pace. By this I do not mean to work less hours or dont work if you dont feel like it, I mean not to rush yourself if you don`t have to. Just have fun with it and explore and push it to the best of your abilities and even further.

After a couple of other projects, I ended up coming back to this piece and taking on the advice I was given during the Industry Workshops. I wanted to see if I can tackle the task better this time and push it with an environment around the train and have a story in it.

So after finishing my studies, the work on the train has begun again. This time, fully in Maya. I gave myself a deadline: two weeks to polish, fix geometry and finish it.

I only modelled what I saw from the camera. I used general box modelling tools in Maya and Opensubdiv for the train to crease the edges. Then I played around with the lighting to explore different moods but I still wanted to keep the abandoned feeling that I originally had.

After this and quick automatic UV-ing in Maya, I started making textures in Substance Painter. I wanted to push my texturing abilities further so I made individual textures for most of the objects.

I tried using displacement maps or normal maps for the meshes to achieve detail, however, I encountered technical difficulties (like Maya crashing a lot when adding more displacement maps) and that was the time when I was suggested by one of my teachers at my university (Glasgow Caledonian University) with the process of clamping your displacement map values. I wouldn`t say that I was fully successful at it, but it helped me what to do better next time and how to approach these kinds of projects in the future.

For making the tables look more natural, I broke up the geometry with a few edge loops and moved them slightly in all directions to achieve that natural wood feel. For making the columns feel less artificial, I added a slight Transform modifier in Maya (similar to Noise modifier in 3ds Max for Max users) and that positioned the vertices in all directions. Similar method was used on the platforms right next to the train. The ornaments on top of the columns were made using Curves (Spline tool in 3ds Max for Max users).

I ended up changing the roofs of the houses and added more meshes. I also added some clutter on the table and decided to light up one of the entrances closest to the camera to indicate a no name old bar where the villagers go in their free time. The area is generally kept clean for the customers, but it is cold outside and therefore the bartender leaves the glasses on the wooden tables until the bar closes or until he needs more glasses to serve drinks. There are also some ash trays hidden there suggesting that people were there but the owner of the place is just too lazy to collect them.

The train had to become more majestic and unusual. Not the usual steam locomotives you see in movies but still relatively real looking. I used mainly Merddin Emrys for exterior and Mallard for interior train types at the start and I used Merrdin Emrys as a reference to achieve the final colours.

I wanted to dull the red colour and to make it a bit worn, but not too old. The lamps are working in that train station which might give the idea of the viewer that trains are still going or maybe this railway line was just recently closed and people are trying to hold onto it. I added ivy with the help of An Ivy Generator, which is a free tool kindly provided to us by Thomas Luft .

Ivy was used to indicate that nature is slowly taking over the train station and it is just a matter of time before it is all covered with plants. For the rail tracks I used Andrew Averkin`s method but instead of using geometry for the pebbles I used proxies. The ivy was also converted into a proxy to ease the technical heaviness of this scene.

The last step of making this into a snowy environment was inspired by **[Alex Hogrefes Winter special #4](http://visualizingarchitecture.com/winter-special-4)** snowy architectural visualisation and it gave me an idea of turning this scene into a winter scene. Since this piece was not animated I could just go ahead and paint over it using masks. I did not exactly follow Alex Hogrefes method: as I was rendering different passes (render elements in 3ds Max) from Maya 2016 V-Ray and assembling them in Nuke to see what render pass is for what and how to put them together, I saw the Raw GI pass that reminded me of snow. So I used that for over painting and a bit of lighting adjustments in Photoshop.

So this is my response to all the feedback that I have got for this piece. Is it good? By no means. Do I have an idea which areas to improve on? Definitely. Did I finish it in the allocated time? Nope. But I sure enjoyed all the learning process that was included in it.

Now it is time to repeat the cycle and to show the work to other people again and to submit it to competitions such as the Rookies.

As Arnold Schwarzenegger would say: “Trust yourself, get out there and work like hell. Break some of the rules and never ever be afraid of failing.” My addition to this is that it will take some time and it is okay, just do it.

What Everybody Ought to Know About the Lost Boys School