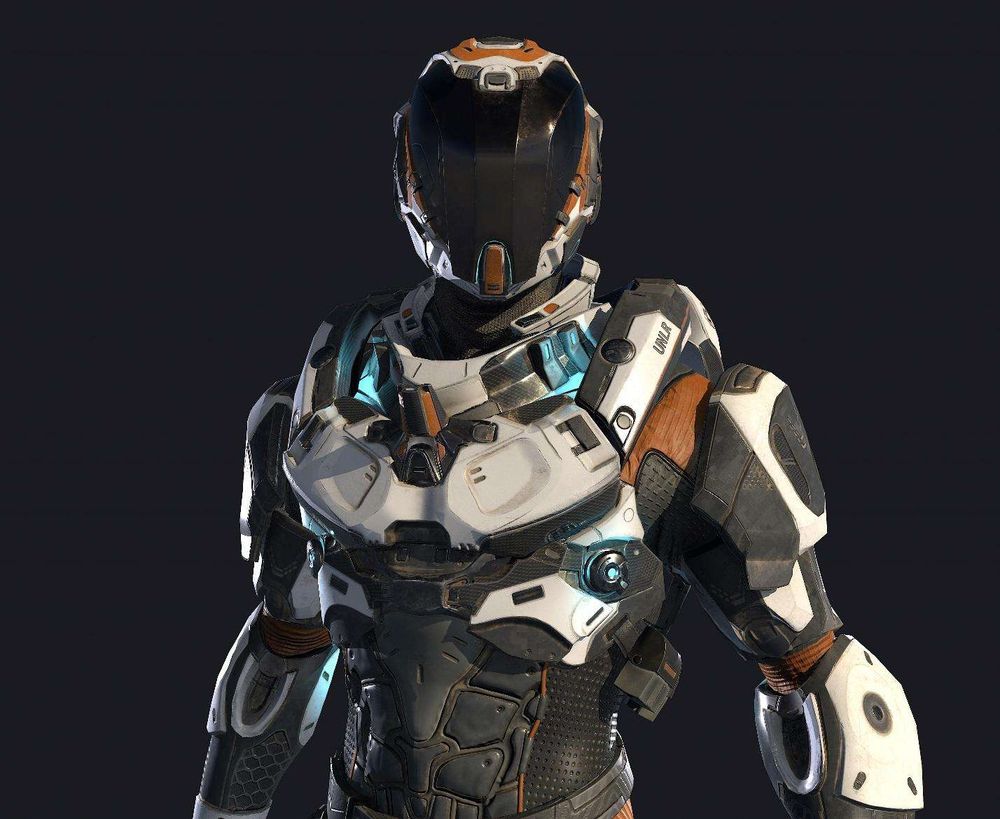 Last fall, I took a class with Chris Cao who is a Senior Character Artist at Bioware. Up to that point in my college career, I had planned on studying environment art, but within the first two weeks of the class, I found myself sleeping and eating in the computer

Last fall, I took a class with Chris Cao who is a Senior Character Artist at Bioware. Up to that point in my college career, I had planned on studying environment art, but within the first two weeks of the class, I found myself sleeping and eating in the computer labs for days on end while I worked on characters.

At the time, Chris was working on characters for Mass Effect Andromeda and the demos he gave us often had a sci-fi theme. My final for the class, Lunar Suit, drew heavily on Mass Effect and my all-time favourite IP, Halo.

I covered retopology and UVs in an article I did for 3D Artist Magazine. In this blog post, I will go over a few tips I kept in mind while working on the project. 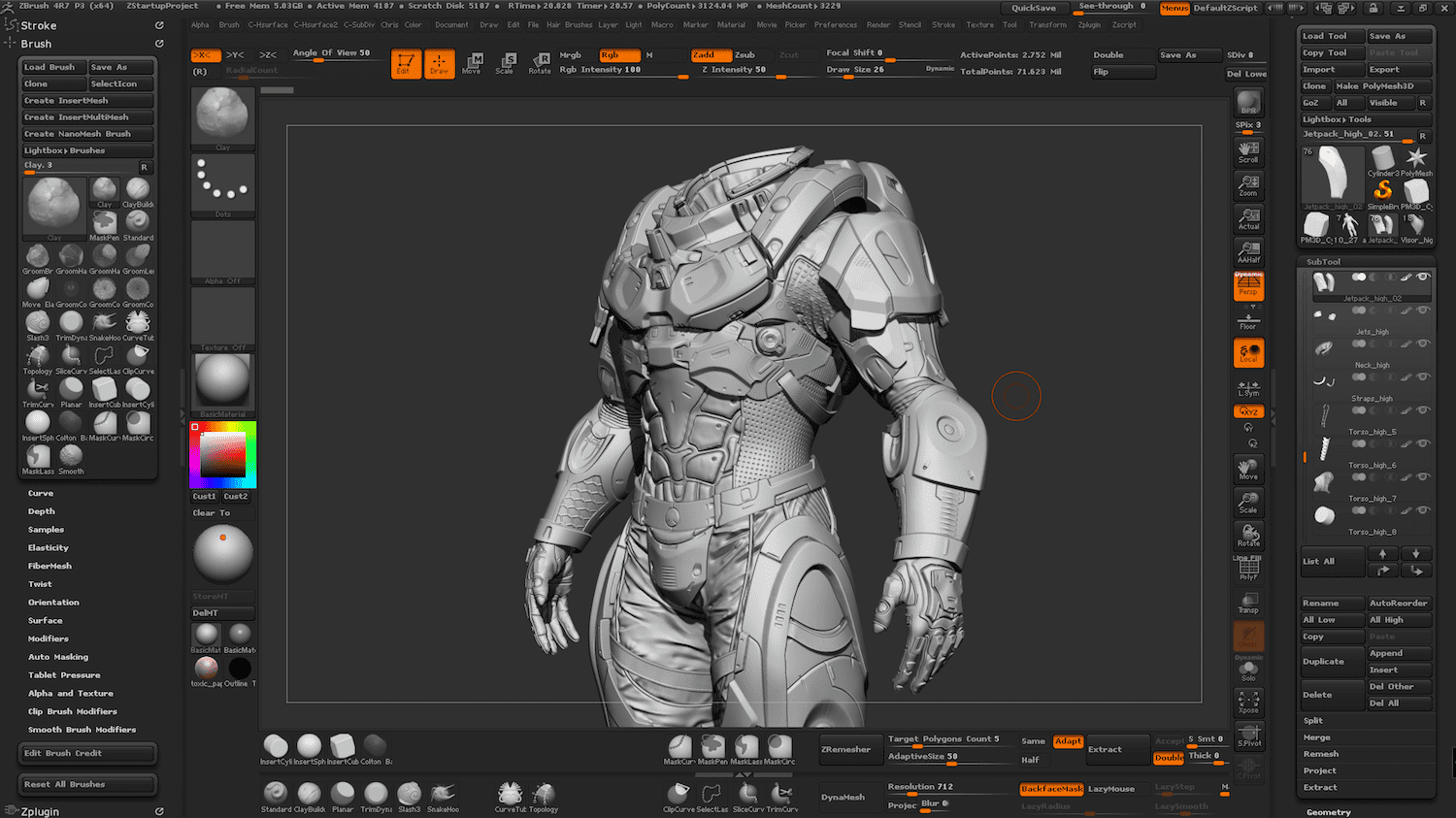 During the beginning stages of a character, especially one that does not have concept art, I will limit myself to only one or two subtools. I work with the move brush, snake hook, and clay buildup to define the silhouette. Using one of the outline shaders in ZBrush is one of the best ways to check your silhouette so I have a shortcut for the material that I use very frequently during the initial stages.

The greatest lesson I learned from this project was to never underestimate the value of consistent feedback.

Some numbers I keep in mind: subtools around 4 million each. I try not to go over 70 million per tool to keep my scene relatively responsive. In this case, I split the head (30 million) from the body (70 million) after I finished the block out.
Low Res: 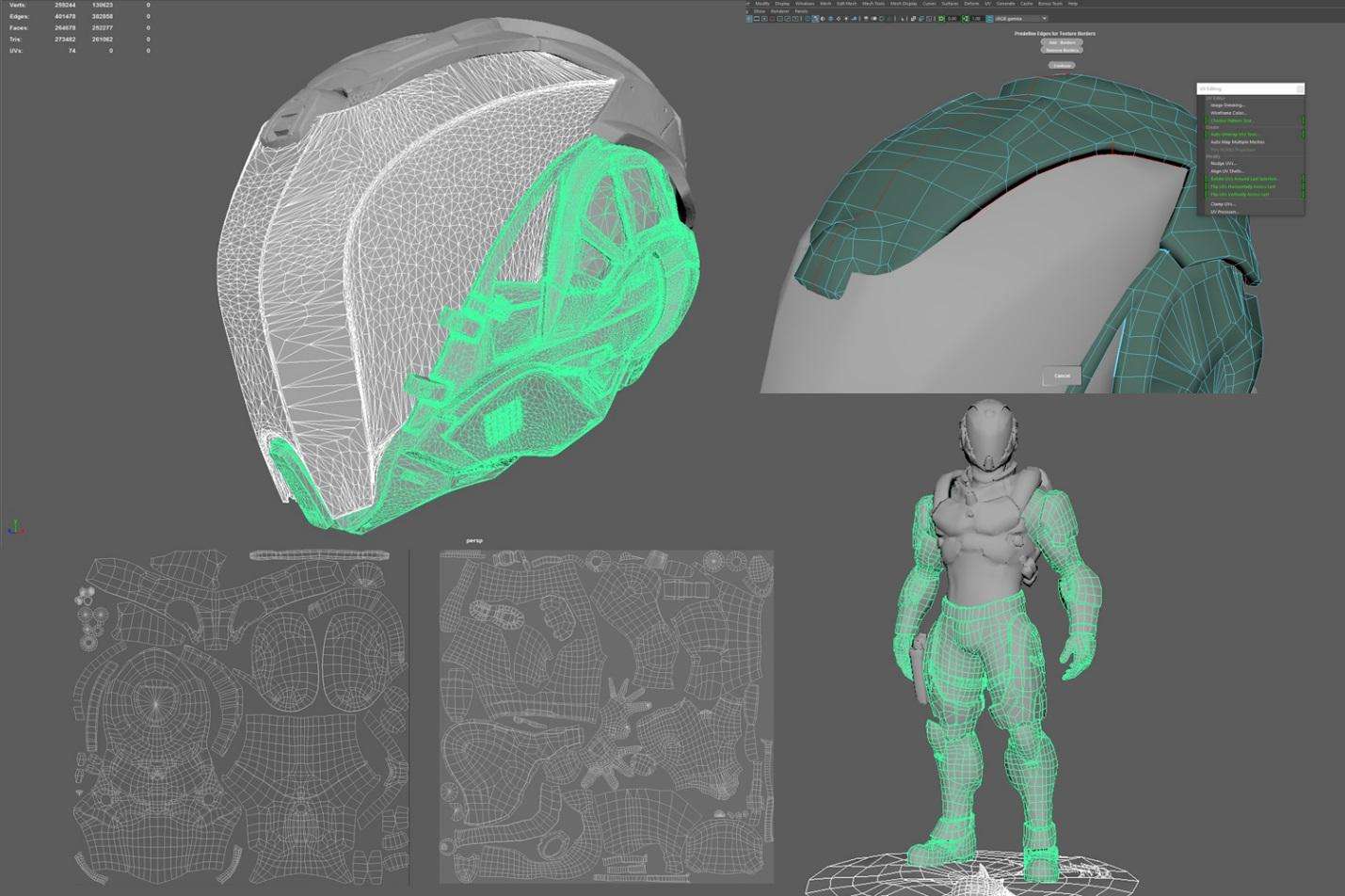 The high res will almost always take up most your time on a hyper-real piece, but never forget the importance of budgeting your time to make a good low res. I try to leave two weeks as a minimum to retopo, bake, texture, pose and render.

Unless you are just aiming for a high res beauty shot, these final steps create the actual model that will be presented, so put on a good podcast or your favourite playlist and invest in your low res.

I decimated my high res and used Maya’s Quad Draw for the retopo. Bonus Tools came in very handy for the unwrap.

I threw away quite a bit of time setting up the Match by Name feature that Substance Painter can use for baking. I love the method because it avoids the need of doing an exploded bake, but on a project with nearly 100 subtools it took an inordinate amount of time to set up the process. 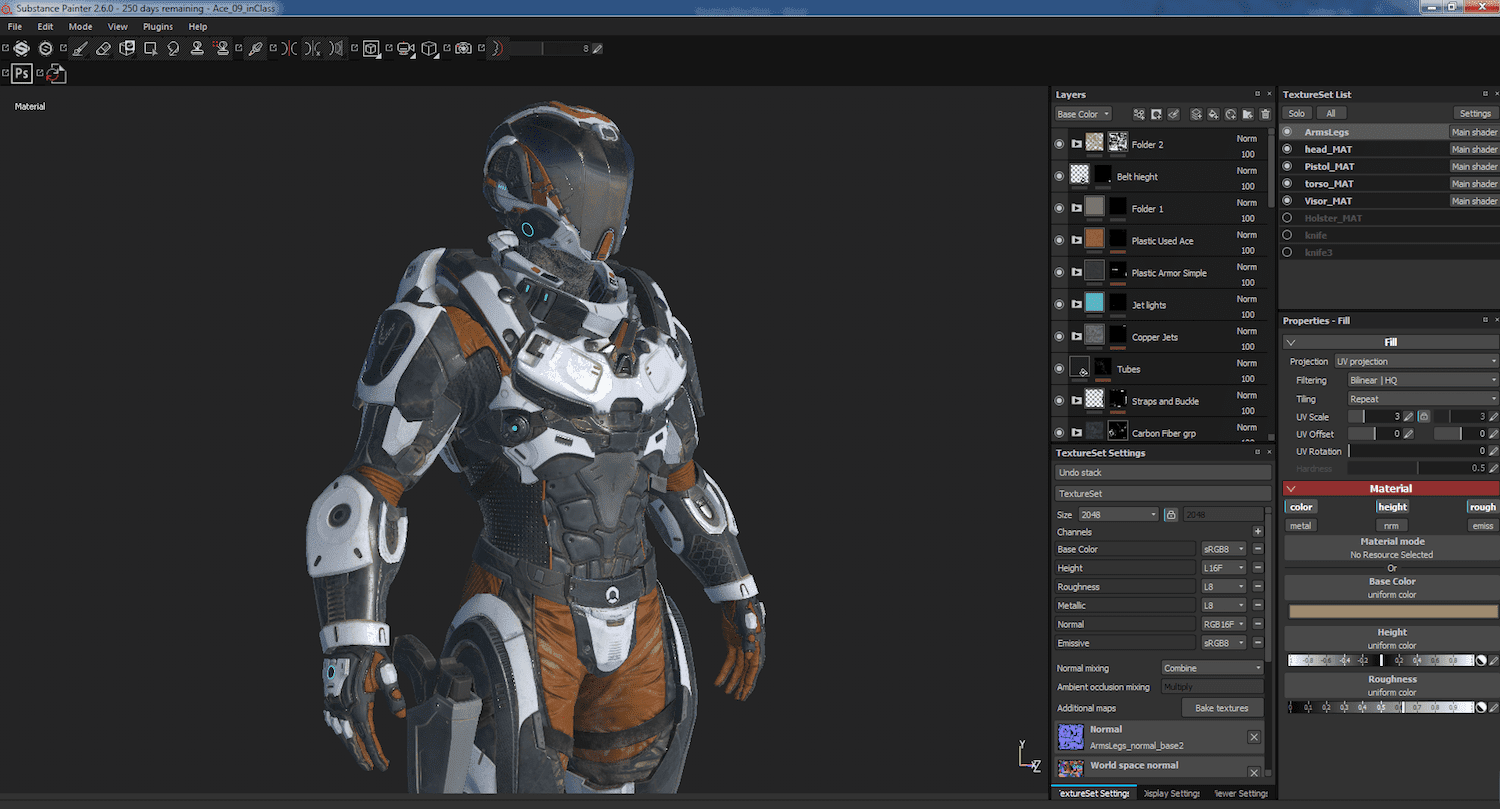 Marmoset 3 is far superior for baking. On more recent characters, I have combined subtools that do not intersect, then manually set up bake groups in Marmoset that match the low res.

This method allows you to get around the hour long wait times for exporting FBX files from ZBrush while also negating the need for perfect naming conventions. Marmoset 3 is also unrivalled for its real-time cage adjustments which result in extremely clean bakes. 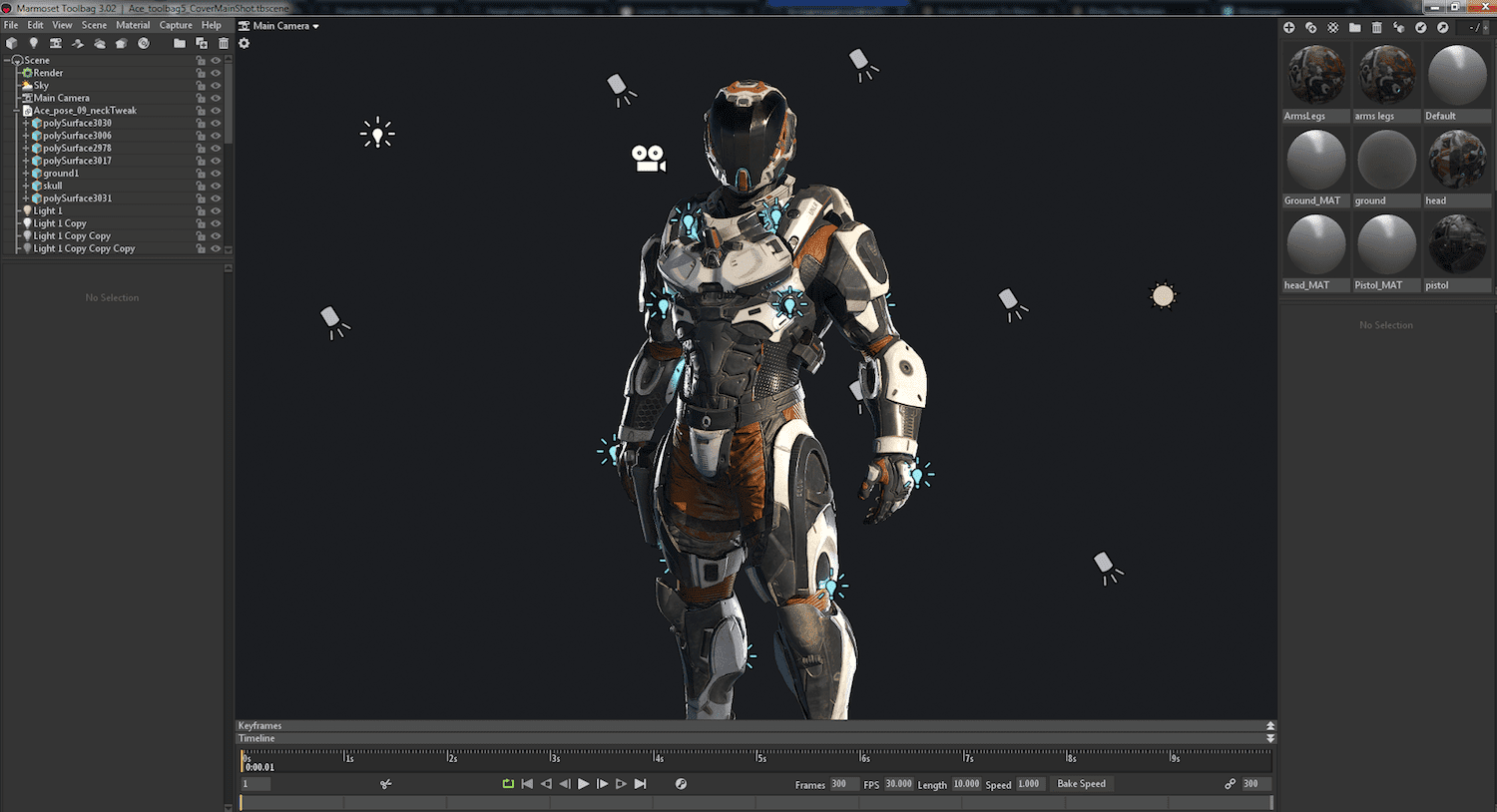 The greatest lesson I learned from this project was to never underestimate the value of consistent feedback. The following semester, I had much less time to spend on my next character, but my biggest mistake was not working alongside my peers.

I spent my time working on my new computer, alone in my dorm room. It cut me off from the constant feedback that I would get from my classmates at the lab and the effect this had on the quality of my next character was unmistakable.

It would have been possible to supplement some of this feedback with online forums (Polycount, Facebook, Artstation) but I find the best help comes from having a group of like-minded artists looking over your shoulder every day.

I did the final pose in ZBrush and the renders in Marmoset with some post process done in Photoshop.

I want to thank The Rookies for giving me the chance to share my art with the community and hopefully inspire more artists along the way!

I also want to give a shout out to all the other incredible work and blog posts that have been shared on this website. It is always inspiring to see the talent, dedication, and kindness that is expressed by the people in our community.

Best of luck to everyone who is still putting the finishing touches on their works—I can’t wait to see what you come up with! 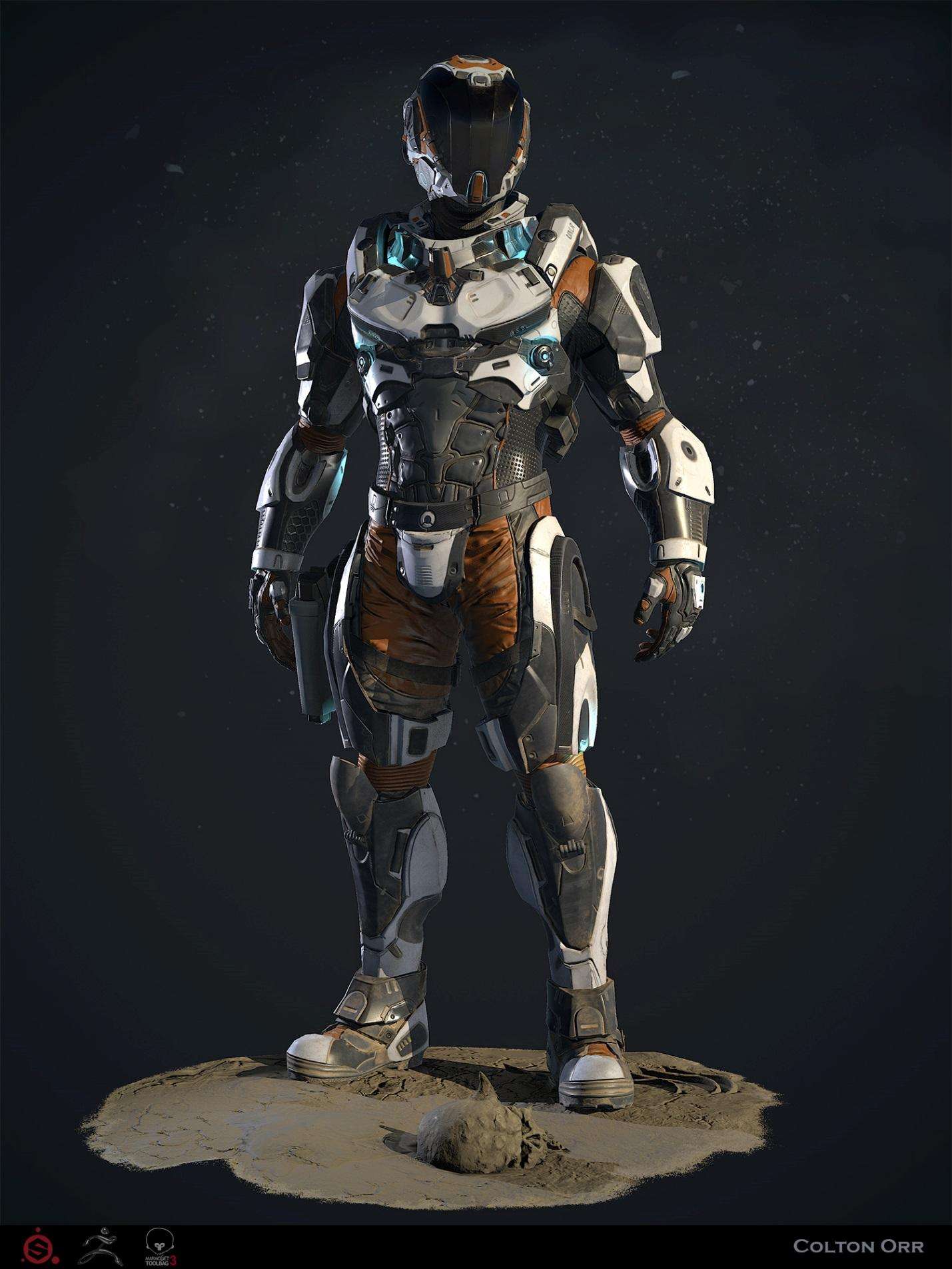 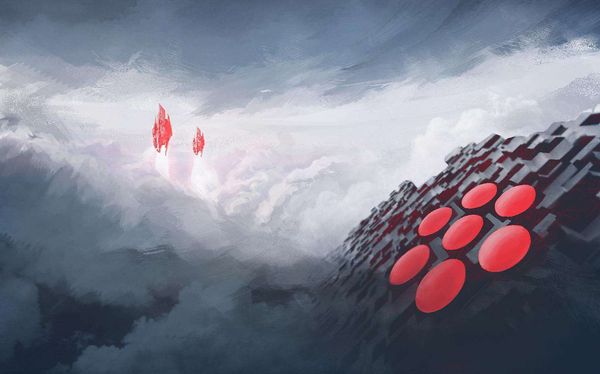 I, before everything else, want to thank the Illustrator Jérôme Pelissier for teaching me the basic of colour in digital painting and the Visual Effect Supervisor Stephane Ceretti for motivating me for life in one sentence. What motivated me to participated to The Rookies is because of what this challenge 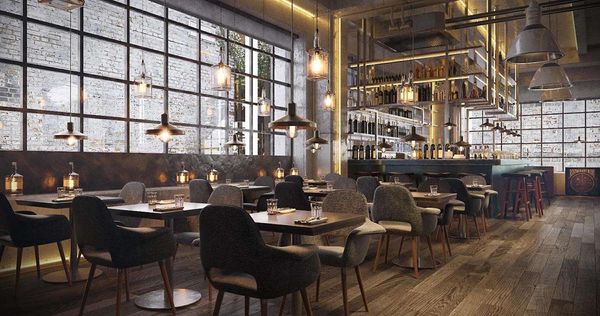 For this project, I used a model that I created for a client who wanted to visualize an empty space. I had rendered an empty model, but believed that this project had the potential to transform itself into something unique. CREATIVE INSPIRATION The large open space was an instant source