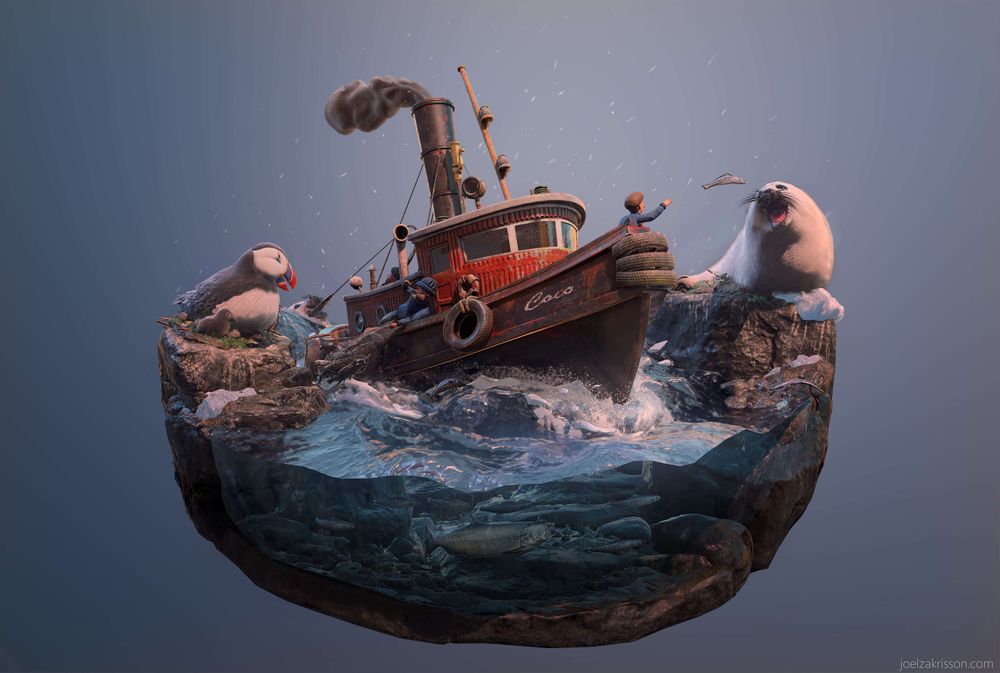 How To Make Your Portfolio Stand Out

Presenting your work within the frame of an interesting diorama will most certainly catch your viewers’ attention. Joel Zakrisson [https://www.artstation.com/joelzakrisson] wrote a bit about how he took a simple boat model and turned it into something truly special. Starting a Fishing Trip Fishing Trip [/projects/game-development/

Presenting your work within the frame of an interesting diorama will most certainly catch your viewers’ attention. Joel Zakrisson wrote a bit about how he took a simple boat model and turned it into something truly special.

Fishing Trip was my final project during my studies at Futuregames, but also the first one I started. Like most of my projects, it began as something rather small and grew into a more ambitious piece throughout the education.

The initial idea was just to practice some high poly modeling during my summer vacation, right before school began. I was inspired by old boat miniatures and decided to re-create the charming H125-HO steam tug.

Later that year Quixel came to Futuregames and held a texturing course. I thought this would be a great opportunity to bake my boat to a low poly model and texture it in DDO for my texturing assignment.

I exaggerated the tug’s proportions to enhance its personality a bit, which I then complemented with realistic materials. When texturing I relied a lot on generated masks for worn edges, rust and dirt. Limiting brush usage to mainly editing of masks usually provides a better and faster result than just painting by hand, in my opinion. 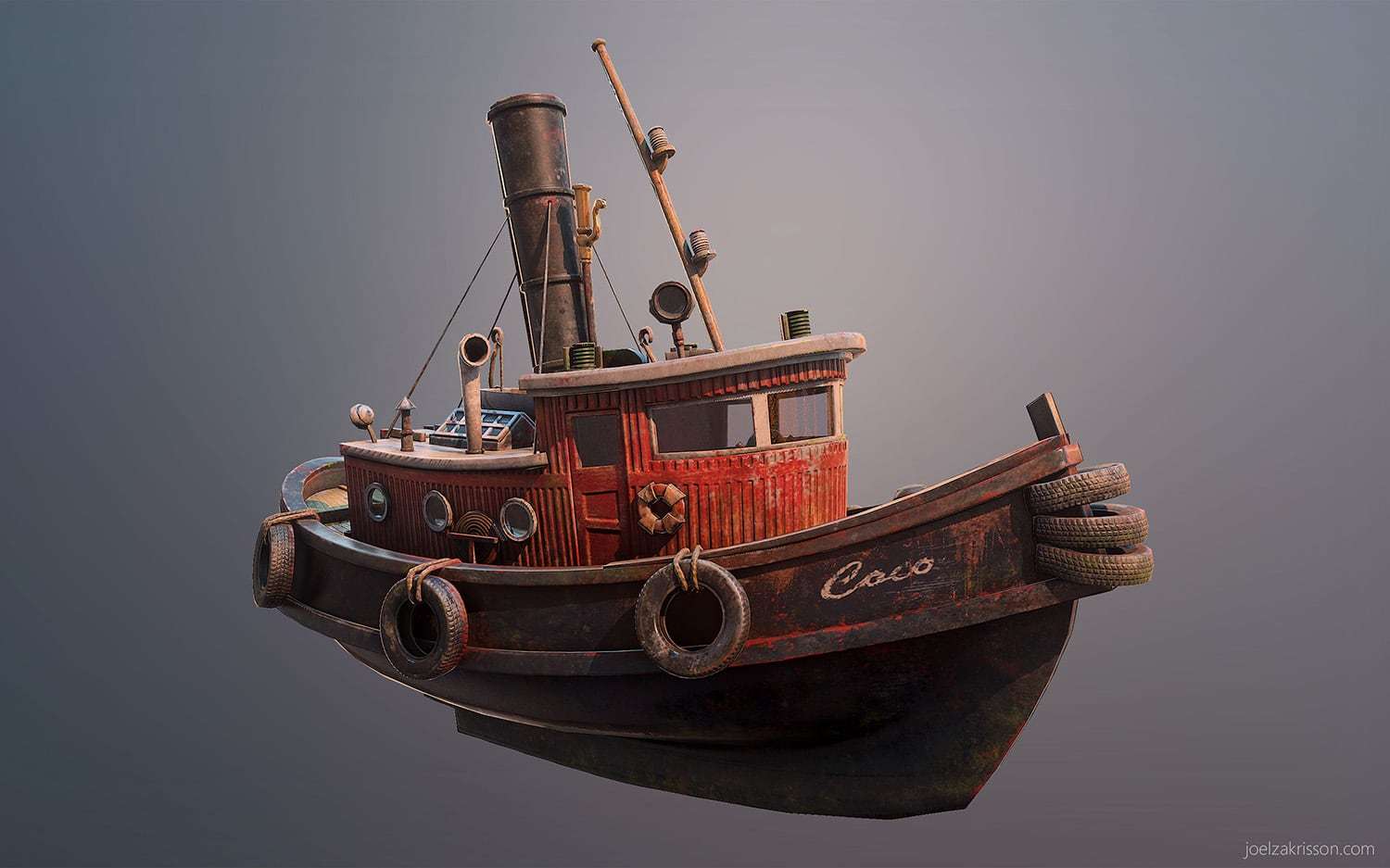 Bringing the Diorama to Life

Our 3D teacher always encouraged us to present our models on a platform, which was something I really took to heart. I had a vague idea about doing some sort of diorama, but it wasn’t until I started blocking it out in Maya that concrete ideas started to take shape. 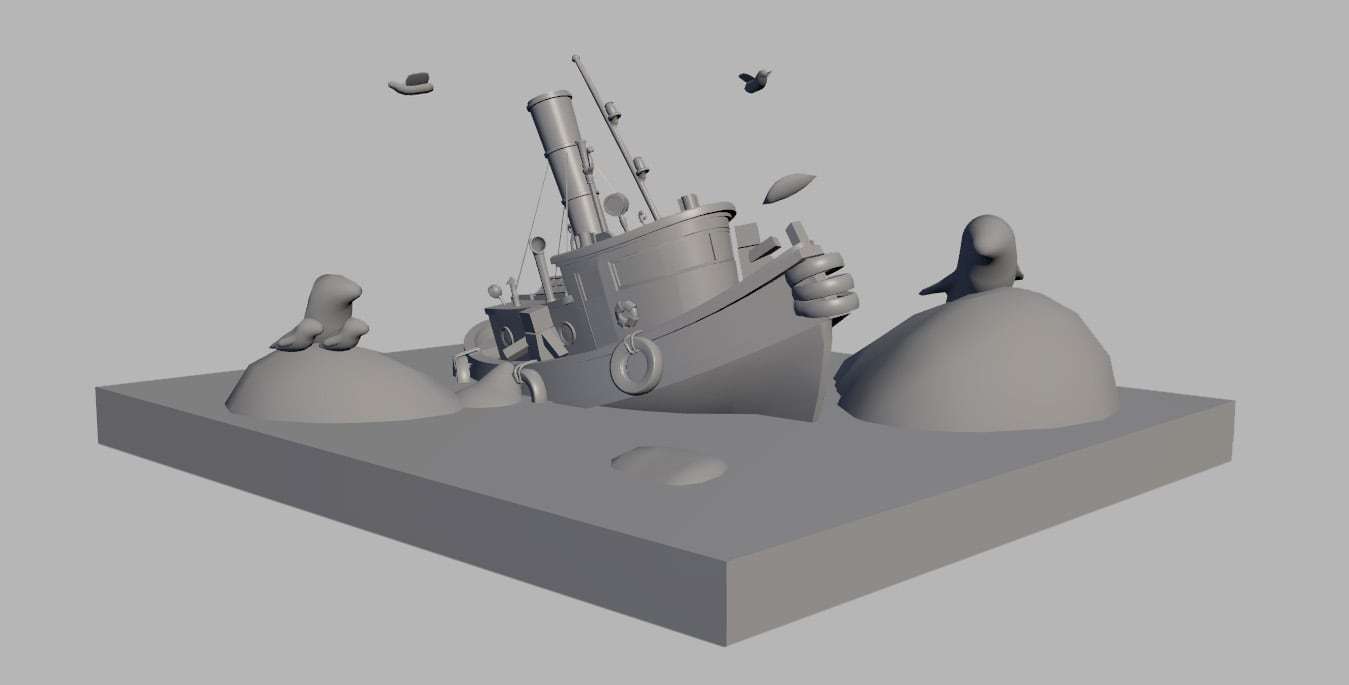 Fishermen meeting seals became the core concept that I just continued to play around with. At one moment I even had a bit too much going on and had to dial it back a bit, but the experimentation helped a lot with the creative process and sparked some great ideas.

I started to bring assets into Marmoset Toolbag 2 after a while, but the composition was still built in Maya. Throughout the process, I always tried to keep the scene’s flow in mind, from all angles.

Of course, I also had a huge library of pictures as inspiration as well. Most of the style and tone originated from real life miniature models, while the setting was based on islands around the North Atlantic Ocean.

Taking it to the Finish Line

With the boat and block out done, it was now time to finalize the rest of the scene. I started by sculpting the characters in ZBrush, which was both one of the most fun and worrying parts. 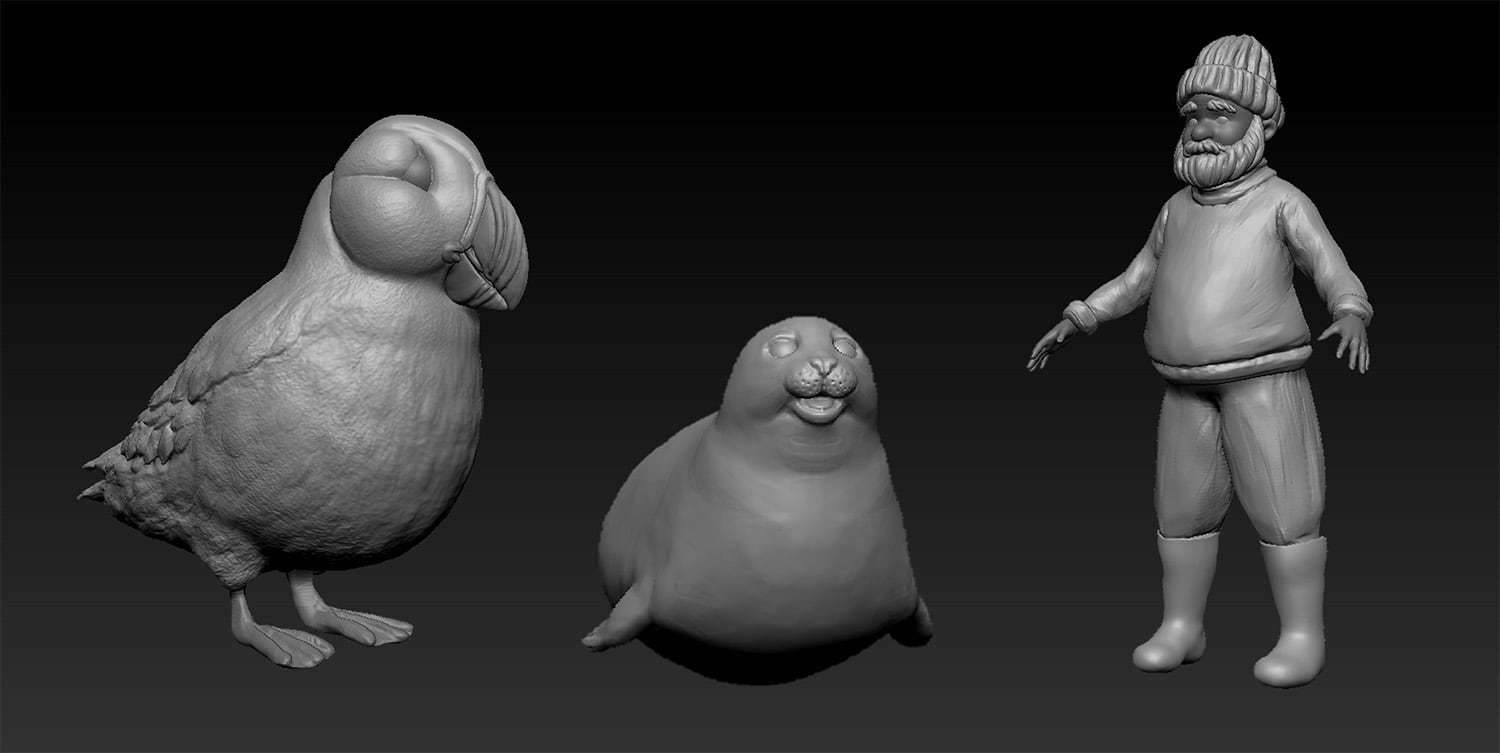 It was a real struggle to achieve the cute look, but exaggerating the low poly shapes in Maya sure did the trick!

Fur was also a challenge. I solve it by having four transparent layers on top of each other, all wrapping around the seals body. Each layer was mapped to its own quad of a wool texture, where every quad had different transparencies and brightness values. Outer layers were the most transparent/bright, and vice versa. The same technique was used for the scene’s baby birds and the colossi in Shadow of the Colossus.

Fish were quickly made by tracing images found online with the “create polygon tool” in Maya. Some thickness was also added towards the middle.

I used a few different rocks to construct the base of the environment. Other elements such as vegetation, mud and snow were added on top afterwards. Both the animals and all of these environmental pieces were textured in Substance Painter, except for vegetation.

The water was basically an ocean texture that I tessellated inside of Bitmap2Material. The generated height map could then be used on a plane in Maya, that could be adjusted manually as well. The see-through sides were extruded down from the plane.

Related link: How to Create a Realistic Looking Breakfast in 3D 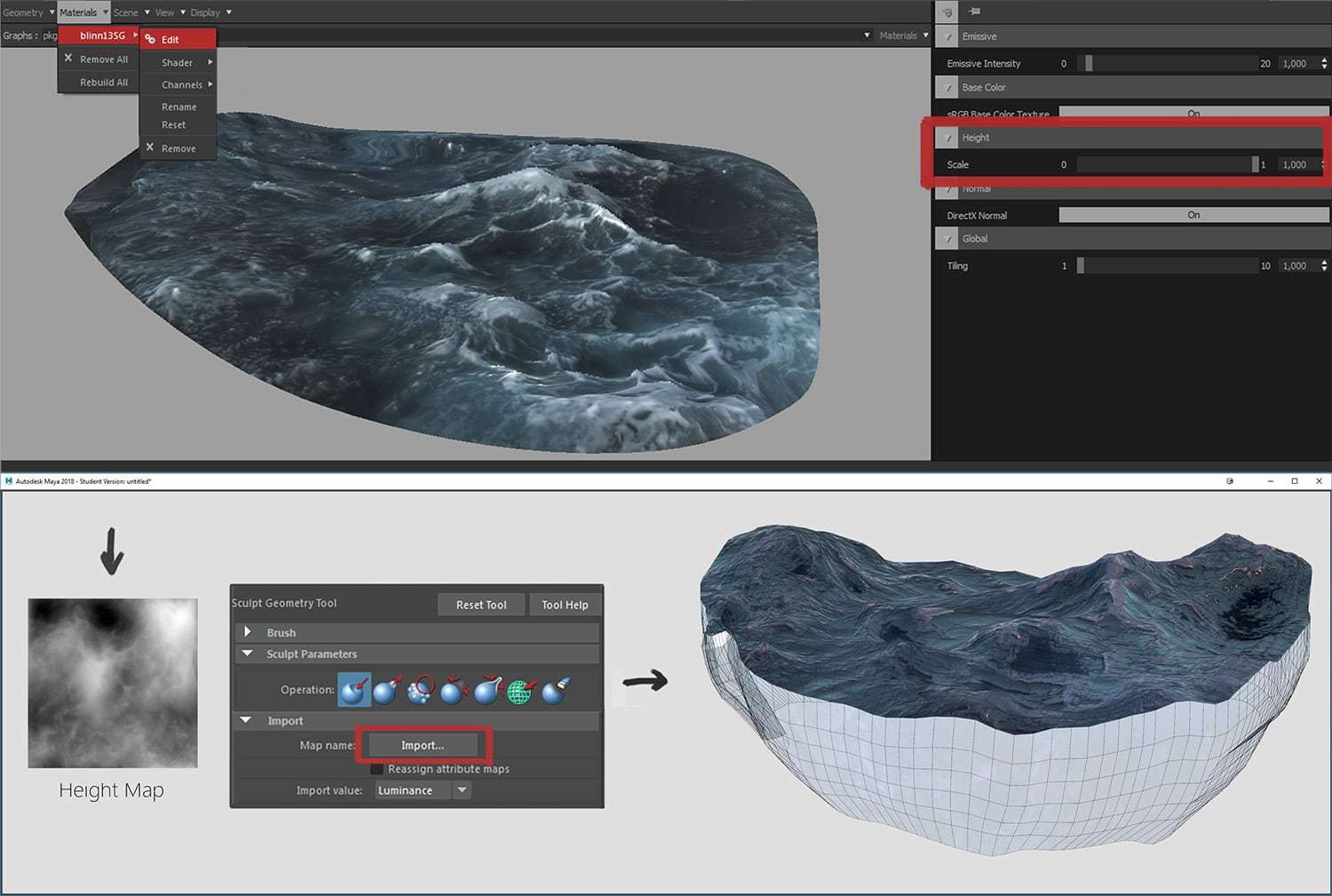 The foam was created in the same way, but with more intense waves as the original texture. Adding planes with transparent splash textures gave it some extra movement.

While Fishing Trip was a quite small project with barely a month’s work spent in total, it still ended up being one of my most appreciated works. I think it’s mainly due to how I constantly pushed ideas and tried out different approaches while working. Following a concept to 100% may be the safer route, but letting yourself go and experiment will lead to a more enjoyable process and a personal end result. 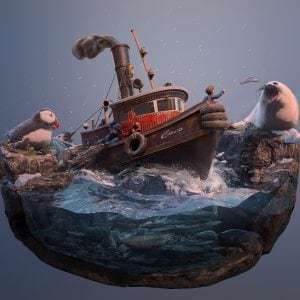 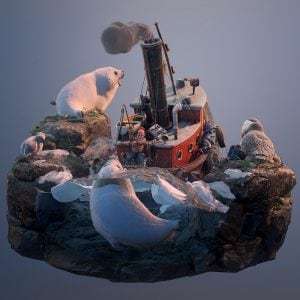 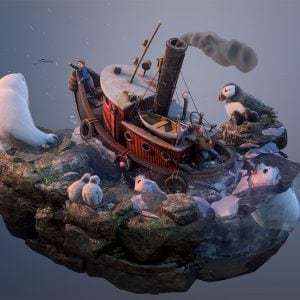 Earlier this year I had the opportunity to experiment with the idea of creating a completely modular, procedurally built environment. My goal was to implement procedurally generated elements in my level without sacrificing my design, aesthetic, and performance goals. With this in mind, I thought I would share a few