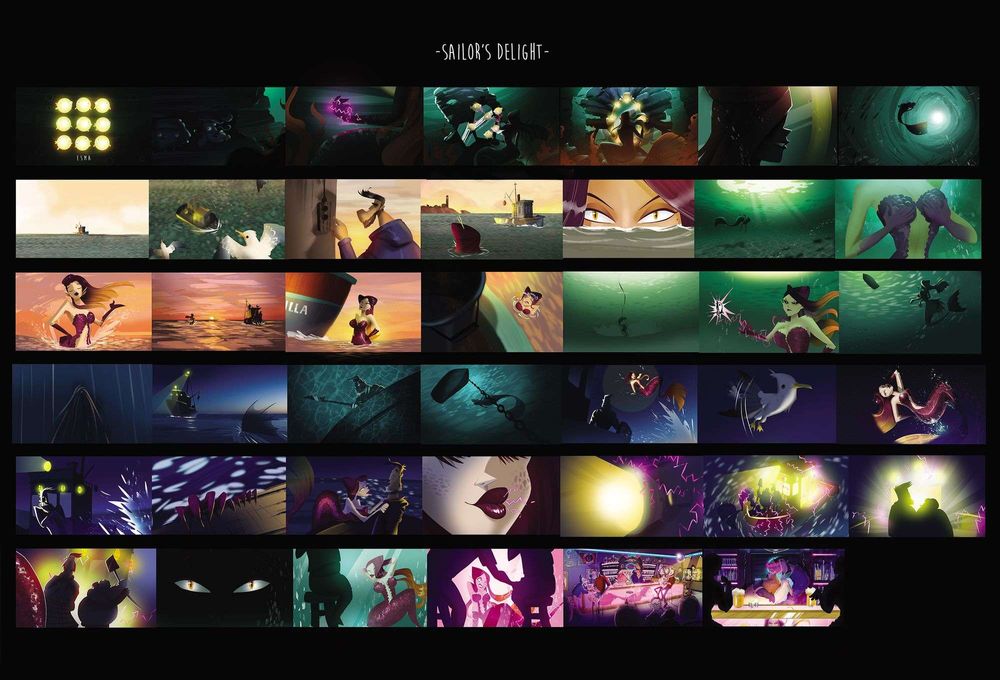 How to Make a Student 3D Short Film

This movie was part of our last year school assignment from ESMA Toulouse (France).

Our courses lasted 3 years. The first 2 years we have learned to master the main 3D software and they prepared us to the struggle of making a 3D short. The 3rd year was the year of production of our short movie.

Eloïse came up with the original idea: a killer mermaid tries to seduce two sailors but they seem to resist to her charm. We have, afterwards, worked together on the scenario to refine it.

Under the cover of humour and derision, we wanted to break the cliche of universal beauty, and show that everyone is free to love anybody. We chose to combine 2 cinematographic styles: horror and comedy. With the horror style, we wanted to play on the audience's fears and reveal our mermaid’s terrific aspects.

With the comedy style, we wanted to entertain the spectator by representing the ridiculous nature of our characters. Moreover, by putting the movie in the 80's we could use the horror movies of the time, the perfect bridge between comedy and horror.

In parallel of the work on the scenario, we began the pre-production. We gathered a ton of reference images, thus Eloïse and Jonas could start drawing the characters. Visually, we wanted the movie colourful and expressive, with different lighting atmospheres and a diversity of environments.

We got the same idea for the characters: a diversity of shapes, colours and personalities. Moreover, we wanted to break the myth of the blond mermaid and create a kind of aquatic Elvira, terrific and superficial. On the other hand, the sailors are funny and a bit clumsy sometimes.

We have been trying to put all of these behaviours in our designs. We took inspiration from stop-motion movies because we liked their approach to colour contrast, graininess, exposed textures and differences of scale.

Having finalized the scenario, Amandine and Jonas were able to begin the storyboard. With our two main concepts, horror and comedy, we looked for ideas in several movies.

We have taken, as an example, the cartoon style of Tex Avery, Popeye and "Who Framed Roger Rabbit". As for the horror style, we have taken in example movies like "Jaws", "Scream" and "The city of Lost Children ".

In the first place, we wanted the audience to think that the movie was a horror one. That's why the beginning of the short is darker and creepier than the rest. The goal was to try and get the comic side little by little.

When we started, we drew the storyboard with just a pen and some paper, and we arranged it on a big piece of wood. It allowed us to move or replace scenes easily and to get a global vision of the story.

After that, we transferred our drawings to "Toon Boom Animation", an animation and storyboard software. We could now see an animated version of our storyboard.

The scene transitions and the duration of the movie evolved all year round. We decided several times to cut in the movie. It was too long for a cartoon or action movie.

We decided to remove elements that we felt were too complex to be picked up by the audience. In the end, the movie was more clear and punchy. It was a great lesson because sometimes we are so deep into a project that we do not see anymore what can be improved.

The main struggle with the modelling was to translate our 2D concept into 3D models. We had to reinterpret and adjust the way our concept looked to make it work in 3D.  Eloïse was responsible for the mermaid and the underwater cave.

Marine was responsible for the two sailors, the fishes, the seagull, the bar and several props. Louise and Loucas helped with the fishing boat. For this process, we began by scanning sculptures of the heads of our characters to have a starting base.

Then, we used Maya and ZBrush to improve and finalize our modellings. We also used Marvelous Designer to model the clothes of the sailors and customers.

To create our textures, we used Mari, Photoshop and Substance Painter. To give that stop-motion feel to the textures, it has been a real collaborative work between Eloïse and Marine.

The textures had to be colourful, uneven and textured. To harmonize everything, Eloïse gave the last brushstrokes. To create the shader

Loucas was in charge of Rigging, where each character complexity and deepness had to be reached in only a few value tweaks on Maya. Our animation intentions were an intricate blend of realism, and a shift to a more cartoonish colour as long as the short progresses.

This duality had to match with how characters could be played with by animators, and it has been a whole back-and-forth discussion to aim at this, for the whole production.

Amandine and Jonas, as animators, were then a keystone on the Rigging process, giving daily feedbacks, and helping to push each time further the Rig features, and providing troubleshoots to fix.

Circe has been the most complex asset to deal with, since her mermaid morphotype involved dealing with several creature features (i.e. fins, tail, nails, etc), making her a unique hive of thinking and research. Also, evolving both in an aquatic environment and on land, this added a huge impact on how to deal with weight expression and skin deformations.

We chose to animate in a cartoonish way using marked poses, attitudes, important shapes and silhouettes. We tried to deliver funny animations, which leads to jokes.

We also had to go in depth on her facial setup, as long as Circe had to show many sides of her temper throughout the whole short. Because the sailors are two bipeds, their respective Rigs presented less challenge, but it also was quite a journey!

This has been a long and massive process, but thanks to the invaluable help from each Rigger student (special thanks to Fiona Lynch and Clément Malargé) and our teachers, it has been a reachable objective.

During the pre-production, we chose to have characters with a 2D look, involving general shapes expressing directly their personality.  In animation, we wanted to crank up this 2D influence. We chose to animate in a cartoonish way using marked poses, attitudes, important shapes and silhouettes. We tried to deliver funny animations, which leads to jokes.

Amandine and Jonas, who were responsible for the animation, tried to give some contrast to our 3 characters. The mermaid is an intense, dangerous, fast, sexy and conceited. The two sailors are happy, carefree, clumsy and a little bit anxious. Jonas was in charge of the sailors, and Amandine of the mermaid since this kind of characters concurs with the sensibility of each animator.

The main reference for the mermaid was Jessica Rabbit. As for the sailors, Jonas took most of his inspiration from Tex Avery and others cartoonish animations.

The "Red Riding Hood" of Tex Avery is one of our favourite examples: as a spectator, we are expecting something but in the end, the fool is not who we think it is.

The animation process has been very long, and it was really tough to deliver so many shots in such a short time. With the beneficial help of interns (Manon Debray, Clorinde Fesentieu, Marianne Leflond and Lucas Planchon), we managed to deliver the movie on time.

In the same stop-motion spirit, we used "strong" lights in our movie. With the lighting, we wanted to enhance the characters and the textures. We also wanted to create an emotion, to give an unmistakable soul to the movie.

For that purpose, Eloïse created a colour script to help us determine the various atmospheres. Furthermore, we never did underwater lighting before and it was quite hard to find the right amount of realism.

Marine was responsible for the lighting, the scenes set-up and the rendering. We used Arnold for Maya for those steps. The rendering has been a real challenge, because we had a limited farm to render on, and a few months only to do it.

To be the most effective, we had to optimize our scenes and our samplings. Finding the right balance between quality and render time was of great educational value.

The FX part of the movie was a little tricky. We had stop-motion stylized characters with a cartoon animation. We had to find a look for the water and the lightning that would fit the whole universe.

Some tests had been done with the water motion (wave amplitude, the speed of the motion, etc...) but in the end, we kept it pretty simple and pretty close of a real life look.

Louise, who was in charge of the FX, had to learn Houdini to be able to play with all the flip tanks and other infinite oceans.

Everything was exported in alembic (water) and vdb (whitewater) to be rendered in Maya through Arnold.

For the lightning, Louise did a custom asset. A real-life look didn't match with the animation and the render style, so we chose to give it a 2D look. The asset created a mesh using the characters or props geometry.

It was rendered in white on Houdini and then modified in compositing to give it the colour and the glow. This lightning mesh was also used as a geometry light to be able to give a lighting pass on the characters or the props in compositing.

In terms of compositing, all the technical steps were done in Nuke by Eloïse and Marine. When rendering the images we separated each character, the set and the water FX and we rendered different passes for each.

Thanks to this, we could tweak specific aspects of the image without affecting the overall image. We used a lot of grade nodes, colour correct, shuffle, roto, LUT and others to help the images stand out. We also used Nuke to give life to the lightning FX rendered in Houdini.

Since our graduation in September 2017 we all continued our way into the industry: Louise Aubertin is an FX artist; Eloïse Girard is a Visual Development artist; Marine Meneyrol is a Lighting artist; Jonas Ritter is a 3D Animator; Loucas Rongeart is a Texturing artist and Amandine Thomoux is a 3D Animator.

As for the movie, he is currently travelling all around the world. It has been selected by several festivals including the 2018 Cinéfondation Cannes Film Festival.

To have the opportunity to walk up the stairs of the Cannes film festival and to be among numerous talented artists was a dream come true.

We are really happy with our movie’s journey and we hope that it keeps reaching so many people.

ESMA is a school of applied arts established in Montpellier, Toulouse, Lyon, Nantes and Montréal.

The article demonstrates one way to approach a creature diorama based on a breakdown of Beatrice Gröger's 'Greater Kudu' project. 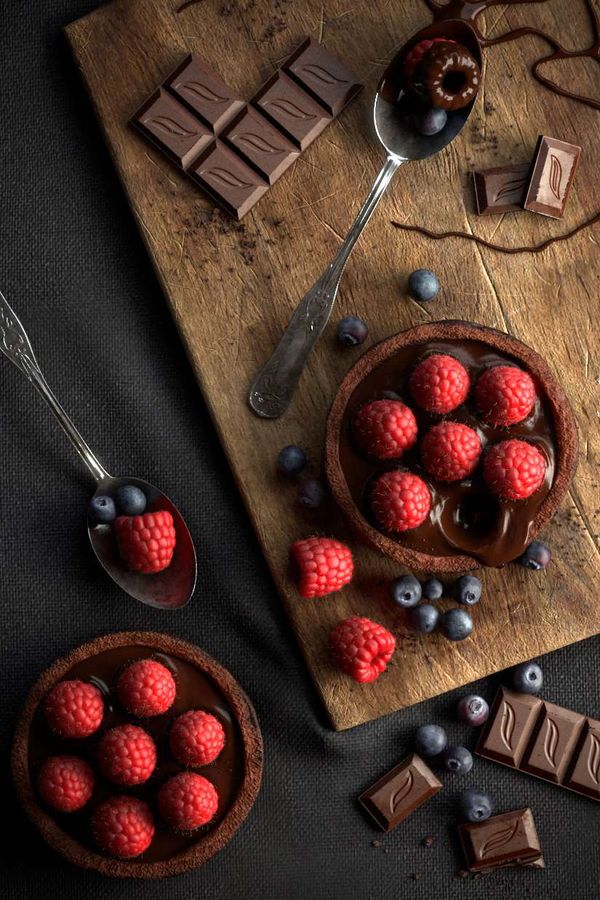 I think creating food in CG can be challenging but it is essential for all CG artists. You are pushed to learn how to pay close attention to detail and use reference. It helps you to come out of your comfort zone by facing you with different challenges that you