How to Concept Art a Haunted House

I am a concept artist who designs characters and environment for games and animations.  I used to do manga, illustrations, children’s book. Theme selection For long I wish to challenge a whole game environment design. , I took an environment class at that time, So I started this project. First

I am a concept artist who designs characters and environment for games and animations.  I used to do manga, illustrations, children’s book.

For long I wish to challenge a whole game environment design. , I took an environment class at that time, So I started this project. First of all, let me talk about why I choose such a horror house to design. I have a crash on Gothic culture.  The horror-themed environment is my best choice.

Then, I realized that I need a literary work to be the story background of my design. This is so important for the concept art. Concept art is the visualization of a spirit, literature delivery good spirit! I chose my favourite writer—Allan Poe because this story called Ligeia happened in an old mansion.

I started by collecting all the things that can inspire me. It can be fashion art, movies, game art, opera...anything. Don't only refer to the world of a game only.

There are tons of great arts that can arouse your deep resonance and inspire you more than you think. I refer to Crimson Peak and some of James Wan's movies a lot. When looking at the reference, about how to do, why this feeling comes. All the skills I abstract from other good arts helped me.

Another thing I'd like to share is that I started looking for reference 1 or 2 days before I started designing. In this way, my subconscious is thinking and arranging the information I looked in the day. In the other day, I will have some ideas. I Wrote down all the keywords of the ideas, and draw some rough sketches to help myself to recall them later.

I had the honour to study from a Pixar Art director. He suggested beginning designing environment with the storyboard. I found some impressing plots in the novel and painted sketches.

I painted the sketches to give myself an understanding of what environment I need.  It turned out to be a bedroom and the outside of the mansion. Due to the storyboard, those places are of most importance in this project.

When drawing those storyboards, I referred to many movie storyboard concepts. I learned from how they do the composition.

We then what we need is to have a plane map of the entire environment. This is very necessary for the environment design for it gives yourself a big picture.  Doing such a floor plan forced me to think about some level design and gameplay things. I want this design to be a game environment instead of a good-looking illustration.

I refer to old houses of England and France in the 18th and 19th centuries. I learned some knowledge from the research. For example, servants have stairs and gates to use separating from their masters'. Their bedroom, eating and rest areas are often in the basement.

All that research made my design more convincing.  I use the coffin shape as a basic shape. In that way, this basic shape will affect my indoor arrangement. I need to balance between real-life research and exaggeration.

After having the plane map of each floor, I started to build a basic shape block with Maya. Considering my environment is complicated, the best way is to have a 3D model. 3D model can help to avoid the trouble of perspective problems.  Another issue is the proportion.

Everything in this environment should be in comfortable proportion to characters. Even in a very stylized environment, the proportion should be correct. I use a cube as a person,  compare it with all the furniture to make sure that my proportion is reasonable.

Another use of 3D is that I use Mental Ray's render result as the paint-over image. The rendered sun and sky lighting contributed a lot to the later polish.

We finally got to my favourite part--adding details. Thanks to all the former steps, we have a reasonable space and now we can start telling stories with details. Environment design is an extension of character design.

In the bedroom design, I put the bed is in the center of a ritual. I hope that players can experience some horrible nightmares after lying in the bed. And these nightmares will give players some clues to find secrets of the old house.

Besides, the butterfly pattern is also a metaphor I used. I also use some other elements such as spider web and rotten meat to increase the horror atmosphere. This also suggested some unusual sensations.

I think the essence of Gothic horror is that it is not logical, but there is a potential story behind it.

In the design of the hall, I referred to the level design of the Uncharted. It allows players to toss back and forth in this square space. Inspired by that, I let three keys hidden in this messy hall.

Players will find all the three keys to start the elevator and be taken to the basement. But at a certain time of a day in the game, the elevator will lead the player to a more terrifying parallel world. (this concept comes from Silent Hill).  This will make a horror game more fun to play.

I only used very simple line art and low saturation colour for most of this design. I paid attention to the thickness level of the lines serving for different purposes. For example, the lines of the object's silhouette must be thicker than the lines inside the object. The next step is simple black and white lighting.

Also, I painted Ligeia's ghost playing the piano in a more polished way. This scene inspired by the Pirates of the Pirate of the Caribbean and the Corpse Bride. I hope that players can see such a beautiful and slightly horrible scene in the game, which is the beauty of Gothic.

In fact, I want to develop some props design further. I wish to do a more detailed drawing, telling the modeller how each small structure,  material looks. But time is limited, I have not completed this step. Because I have done a very large amount of work for this project.

When I finished, I also graduated. It is time to start a new job, and make up for the content and regrets learned from the project with better new projects. 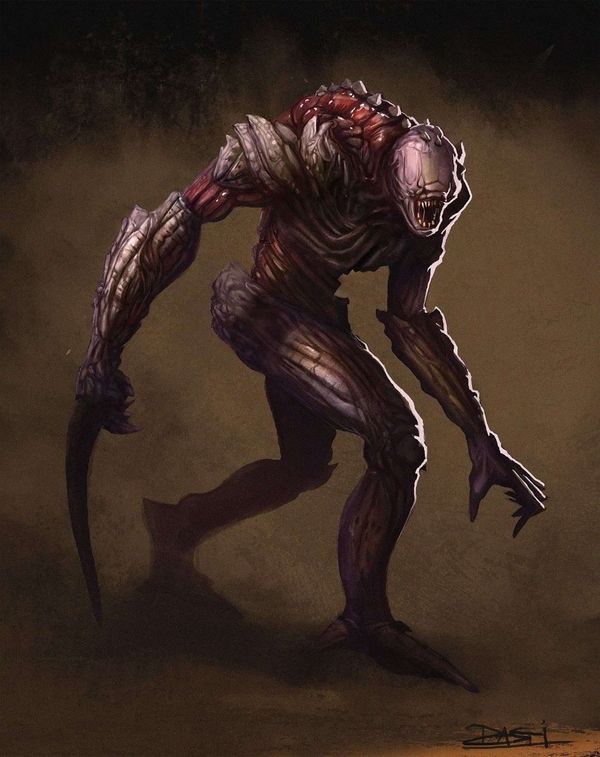 Getting Started Most of the time I am searching and looking for eye catching artwork, ideas, photos, stories, music, anything what will ignite my spark of creation. I always start with simple idea. I have a sketchbook with the description of creatures with little thumbnails.  Sometimes I am mixing different

The Beginning AF26 is a shot that is originally from an independent short film. It was completed as a collaborative effort among artists and producers across the globe online. The original short can be viewed here [https://vimeo.com/148026301]. I was involved as the lighting lead to set up