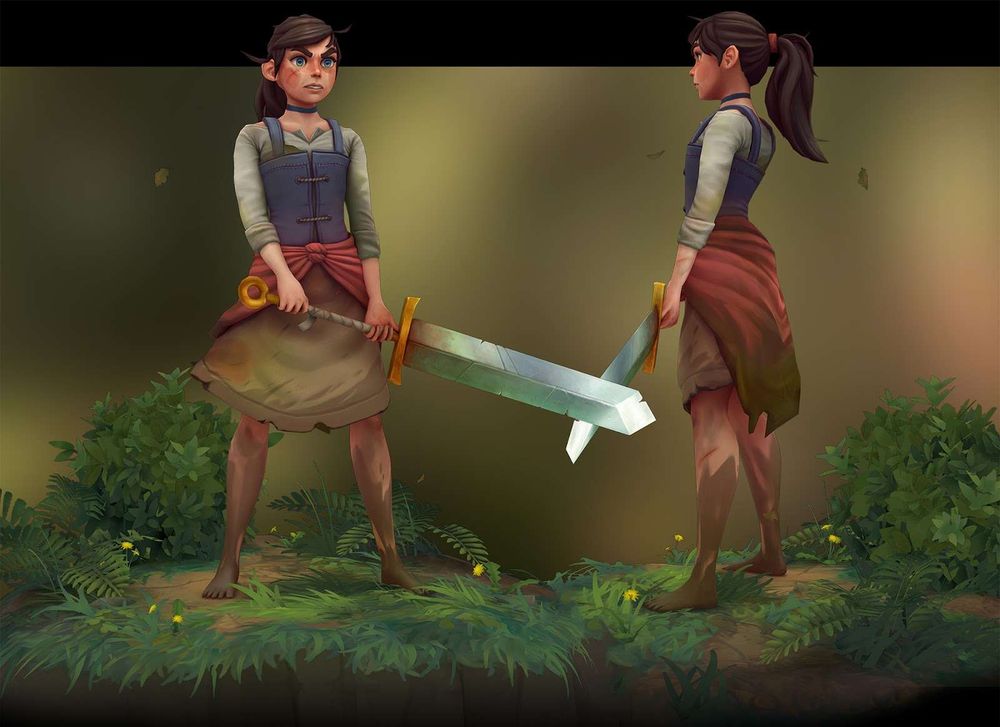 How to Create Your Own Hand-Painted 3D Characters

Games have always been a big interest for me. As a child I spent the majority of my time exploring the story and worlds of Zelda, Pokémon and Rayman. I got so immersed in these worlds that I decided to start making my own by playing with Game Maker and learning GML.

However, my first real game art experience started when I decided to study Visual Art at Breda University of Applied Sciences. At school I learned about the many sides of game art, such as: procedural modeling, 3D animation, standard asset creation and engine implementation. Experiencing this provided me with a good base to start making my own projects.

The journey started when I participated in a competition hosted by Yekaterina Bourykina. The challenge was to create a hand-painted character bust. I ended up winning the competition and gaining tons of experience with hand-painting!

My Thoughts and Goals

After the 3D bust was received so well, I wanted to set the bar higher and create a full character. I’m a big fan of Jake Wyatt and his Necropolis comic, so I decided to create the protagonist from the comic.

The biggest thing I wanted to nail in this project was the emotion. The girl is a ferocious character filled with rage, which she eventually demonstrates by slaughtering a bunch of bad guys. Those kinds of emotions aren’t easy to translate into a 3D model, but I took it as a challenge.

I started the character by creating a block-out in ZBrush. Creating quick blobs in the shape of a human allowed me to establish the anatomy and style pretty quickly.

I continued by Dynameshing the block-out and refining the basic shapes of the body. Adding muscular detail wasn’t a priority because it was not yet determined where the clothing pieces would cover up the body. Additionally, I didn't need to sculpt very detailed, because the sculpt would only be used for a diffuse bake which I could paint over.

While sculpting the face, it was very helpful to have some extra features in place, such as eyebrows, eyelashes and hair. For the hair I used a haircurves brush, edited by Chris Whitaker, called makkon_haircurves_03. For the eyelashes and other pieces of special geometry, I modeled it in Maya and put it in ZBrush. I advise anyone who is new to sculpting, if there’s any task that seems easier in your preferred modeling software, it’s probably worth it.

The girl from the comic has very dynamic and wrinkled clothing, so it took me some experimentation to figure out how to approach this problem. I started by creating a simple dress in Marvelous Designer, which allows me to create realistic creases in the clothing.

In the end I decided to sculpt all the clothing except the skirt. In this case I liked the amount of control I had by sculpting the folds by hand. Even though it isn’t as realistic as a Marvelous Designer simulation, I could get away with it because of the hand-painted nature of the project.

Using ZBrush to create the clothes was simple, I took the base body, masked it, and used Subtool > Extract with a subtle Thickness. I continued by using the Standardbrush to paint some folds.

When the sculpt was finished, it was time to create a low-poly version which I could bake the sculpt on. I merged all my subtools with Merge > Merge Visible. Unfortunately, Maya doesn’t like a 12 million poly mesh, so I had to decimate the mesh using Decimation Master to lower the poly-count a bit.

When the decimated model was in Maya, I made the object live, and used Quad Draw to draw the faces on the mesh. I used this technique to retopologize the entire character. I ended up connecting a lot of the clothing to the skin, which would help me skin the character more easily, and result in less artifacts in animation.

I started this project to build some experience doing hand-painted textures. Like my last hand-painted project, I used 3D Coat because of its dynamic link with Photoshop. 3D-Coat also allows me to make projections of the 3D model, which I can paint over in Photoshop.

For this project, I decided on diffuse-only textures, which means the final product will not interact with lighting in any way. This means all the shadows, reflections and highlights must be painted by hand.

To start off, I wanted to create some base colors and basic lighting. I imported my model into Substance Painter and baked the high-poly model on the low-poly. I continued by using an incredible smart-material called SoMuchDiffuse. This smart-material takes the high-poly sculpted data and bakes it down into a single diffuse texture. Using this tool, I added base colors and gradients for every part of the character.

This is where the hand-painting starts. I continued by exporting the new diffuse texture and importing it into 3D-Coat. My painting process is very straight-forward. My main focus is always to add more definition and highlight to the areas that I want the viewer to focus on. I started by painting lighter values fading from the middle of the face, which gives the face more depth. Additionally, I tried painting a lot of different hues in the face such as reds, greens and blues. I treat this process no different than painting a character in a 2D illustration.

The eyes in particular were fun to make! The vertex in the center of the eyeball is going inwards to create a parallax effect. Additionally, there’s a separate mesh for the cornea, on which I painted the eyes’ reflection. Because there’s distance between the reflection and the pupil now, the eyes have much more depth.

Additionally, there’s a separate mesh for the cornea, on which I painted the eyes’ reflection.

I couldn’t call the textures finished until the character was rigged and posed. For example, changing the position of the arms can create new shadows and creases which I need to hand-paint. I proceeded to create a basic skeleton for the character and a few bones for the facial expression.

Settling on a pose and the facial expression took a while. Eventually I settled on a specific panel from the comic (Chapter 01, page 10), where the girl held a simple but strong pose. When the posing was finished, I could paint the shadows and ambient occlusion, because I now knew which side of the limbs would face outwards.

I think an important part of selling your character is presentation. You can spend hundreds of hours on a project, but if you don’t present it right, people will miss out on what you made. For this project I cared a lot about emotion and immersion in character, so I tried to take that into account when presenting. Adding a simple pedestal wouldn’t be very immersive, so I decided to create a small animated forest environment around the girl.

I have never done a hand-painting project this big, and it’s safe to say it was quite a challenge. Getting all the materials to feel coherent while keeping the hand-painted details consistent took a long time.

However, the biggest challenge was the face. The character is supposed to be an angry and fierce young woman. Yet, I needed to sculpt her in a neutral pose so the character could be used in possible future scenes where she is conveying different emotions. In retrospect, I would’ve sculpted the character with her expression immediately, so I could get the feeling of the scene from the beginning. I could always resculpt the face if I need new expressions.

If you got this far, thank you for reading! I hope this inspires you to make something new! You can find me on Artstation and Twitter. Feel free to send me a message if you have any questions! 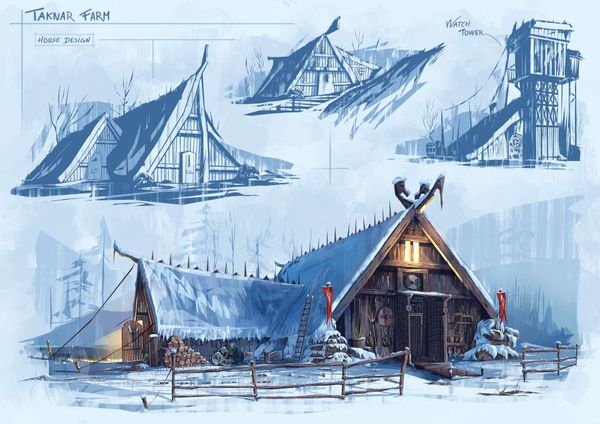 Quentin Marsollier - a 2nd year student at Brassart’s School [https://www.brassart.fr] located in Tours explains the processes used to create a vikings house, viking characters designs and viking landscape through a range of concepts art illustrations. First Steps The first difficulty was to keep the same

A guide in how to approach learning Python scripting as an artist in an animation pipeline.