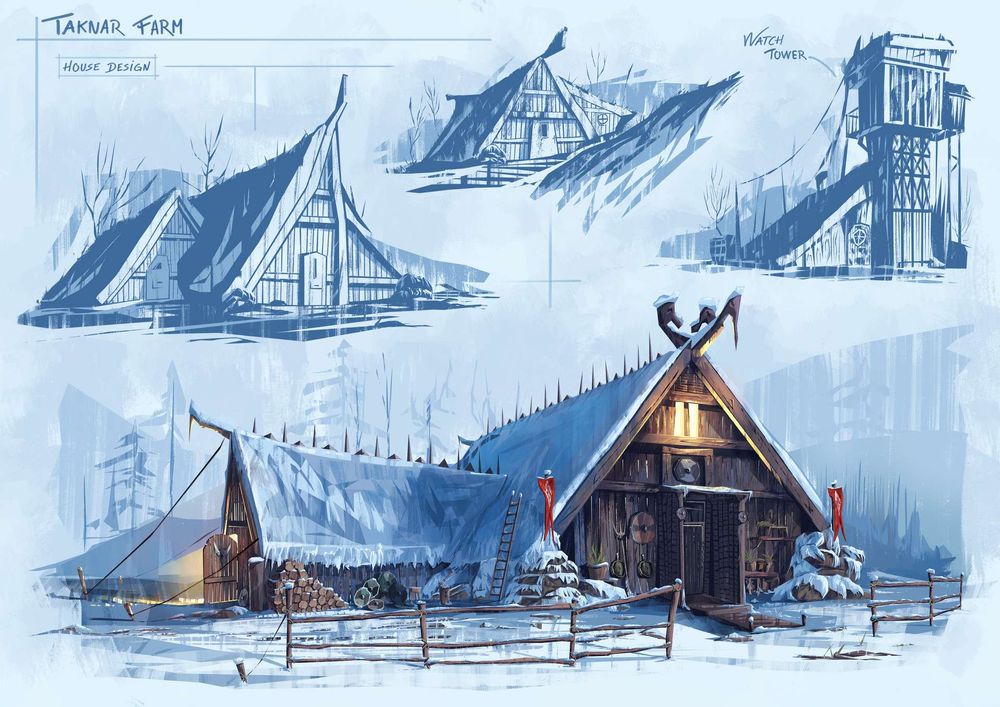 Quentin Marsollier - a 2nd year student at Brassart’s School located in Tours explains the processes used to create a vikings house, viking characters designs and viking landscape through a range of concepts art illustrations. First StepsThe first difficulty was to keep the same graphic style, and also the

In order to keep a link through my different concept illustrations, I often use the polygonal lasso.

The brushes that I frequently use belong to many artists such as:

The brief for this illustration was to create a house belonging to a Viking universe.
Softwares used: 3dsMax, Vray, Photoshop.

There are many sketches types:

There is varied technicals ( traditional , watercolor, ink, pencil, tablet etc…). The sketch at the line is more traditional, it allows to visualize the image composition , to return at the details which are useful for the future. The sketch by mass, or massive sketch allows to quickly define and conceptualize uniques shapes.

Concerning the outside of the house , I decided at the first time to use the sketch by mass, in the goal to define many shapes concepts. Then I added a second shade of grey in order to add volume to the sketch. Later, I decided to realize a sketch at the line to return at the home details

Concerning the inside of the house, I decided to use the traditional sketch for the accessories. Then I used 3dsMax software in order to realize a 3D base and to have a perfect perspective.

The composition is really important to understand the concept art and the illustration. It’s a balance of a picture which will allow to this one to be watched with attention. A composition is as important as the execution of the picture.

Taknar farm concepts arts boards have been composed with large masses, medium masses and small masses, in order to keep a dynamism and to have a solid foundation of composition.

Colors bases: The colors bases allow to determine the firsts ambiances of the concept art and the illustration. In the outside board of the taknar farm, 4 colors are standing out:

A lighting is determined with the help of time, of place, and of universe. In this case, here, we are located in a winter atmosphere, by snowy weather in the viking area universe. The shadows and lights will allow to give a volume at the different concepts arts and illustrations.

We observe a global cold atmosphere into a snowy weather, with slight warm hues in the windows in order to be able to tell a story to the research board.

Added of a graphic background with trees and mountains shapes in order to reset the board and makes it dynamic. Added details with accessories and little twigs of grass. Added fences. This allow us once again to situate the home’s place.

In taknar farm 2, we will begin to dissociate the objects with many colors:

For the props but also the integrality of the project, it was necessary to have a coherent color base compared to the first concept art, in order to stay in the same universe with red and brown hues for exemple.

In taknar farm 2, we globally observe an identic atmosphere compared to taknar farm 1. This is in order to show that the concepts arts are in the same place at the same time.

The hot light of the first concept art correspond to the small lit campfire in the concept art 2. We have a return of cold light with an other opening on the left of the concept art, which is reflecting on the objects in surroundings. I also chosen to represent small window openings near the chair.

Creation of a character which belongs to the same univers that the previous concept art. The documentation was very important on the character design subject, with the research of vikings outfits, vikings hairstyles, vikings profils, and vikings universe.

I decided to use a traditional sketch, in order to make the drawing dynamic. I don’t used The 3D bases in that case because I think it would have taken longer time that drawing the character by hand.

At the search of forces lines to continue to keep dynamism to the character. The force line is the same for the 3 characters. To energize this line, you have to give it a curve but also other small curves in order to give a balance.

The composition of character design concept art is basic, with the masses division depending on the frame of the characters and their arrangements.

The same as the others houses concepts for always keep the link to the chosen universe. The graphic background stays basic and doesn’t attract the viewer. The background stays in a bluish hue with texture, however, the background is darker in order to make bring out more the visuals.

The colors bases stay in cold tones, in order to stay in the same winter universe. I also used the red color code on the characters cheeks in reference at the first concept art.

I decided to realize the characters in a cold atmosphere, with a hot orange counter-light which allows to detach a character of graphic background and to give some volume at the concept art.

I added some details to affine my concept art:

3D lightings: The 3D lighting was important in order to give the giant side at the icebergs. It is part of the image composition.  I took the decision to realize a cold lighting, cutting by a mountain outside the picture in order to put forward the right icebergs forces lines.

The sun hits the ground where the boats are passing, it is to put them in the light.

Where do we want to direct the viewer’s gaze? What do we want to tell? The composition is important at the picture comprehension. It exists an impressionnant number of composition, as well as :

In this case, I decided to use the third composition to dynamism the picture. My horizon is almost placed on the third. The boat is placed perfectly to the third of the picture. The viking is situated at the third of the picture with the face at the intersection of thirds. The icebergs lines are dynamics and dirige the gaze in direction to vikings boats bring out the mountains of the image allow to give a dynamic and a giant effect to this one.

The picture is composed through:

An illustration is regularly composed of a dark foreground, a second plane in the light and a third plane which is much less saturated.

Details in shades of gray:This is an important step to well refine the composition and to know where to put the importants details of the illustration.

On color mode, I put the first color juice in the illustration to give a general atmosphere to the glaciers with blue color. Thereafter, I Added the first hot lights shades on the glaciers in color negative dodge. And I used the turquoise light to differentiate light from glaciers.

The birds allowed to give life to the icebergs and the illustration.

FX: The Fx allow to detail the image while telling a story, that's why I decided in this illustration to use the dynamism of snowflakes.

I used the color balance tool to redefine the shadows and lights color.

A long-term project that allowed me to discover new techniques.

The realization of the vikings concept art have taught me a lot about graphic coherence, graphic universe and, gradually, I discovered new techniques in my lasts ones. A big thanks to the rookies for this article that helps me to relay my passion through workflows. Hoping that the article will have taught you more and learned some small techniques.

I also want to thanks my illustration professor, Pierre-Oliver Malo, who have taught me to discover the graphic world with passion.  If you have some questions, you can find me here: Artstation |  Instagram |  Linkedin |  TheRookies

I’m currently studying as a 2nd year student at brassart’s school. I decided to move towards the universes creation professions, as the creation of animated movies, videos games or movies.

I began focusing on my goals of working in the Game Industry back in August 2018 when I enrolled in the Game Art Institute’s Character Artist Bootcamp. This was the greatest thing I could have done for myself because I learned so much and developed a new understanding and 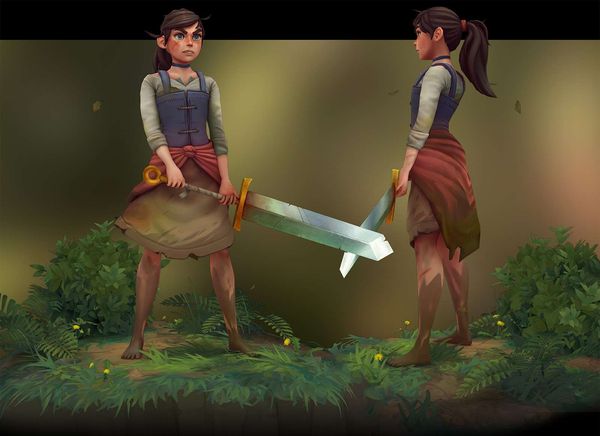 Draw Your Weapons by Manuel Sitompul on Sketchfab Games have always been a big interest for me. As a child I spent the majority of my time exploring the story and worlds of Zelda, Pokémon and Rayman. I got so immersed in these worlds that I decided to start making