How to make a painting survive your beginner’s entanglement

In this article I’ll tell you the troubled story of my last painting. It’s a story about messy workflows, self-critique and resolution. It speaks of the struggle of the concept art beginner, and hopefully it will bring some useful hindsight. How it all started A few months ago

In this article I’ll tell you the troubled story of my last painting. It’s a story about messy workflows, self-critique and resolution. It speaks of the struggle of the concept art beginner, and hopefully it will bring some useful hindsight.

How it all started

A few months ago I enrolled in a CGMA online course. It was my first time attending a Concept Art class, and it was really exciting. The focus was on Environment Concept Design: visual development of an imaginary environment. But the path from sketching concept ideas up to a finished painting didn’t go as smoothly as it may sound…

This was the beginning: a light hearted two-hours painting without too much thought behind it. It actually was an exercise on overcast lighting. A building in my city inspired me and I just played with it.

Then, I decided to make this my final piece for the course. And that’s where the trouble began.

They say concept design is like a muscle, and I found myself terribly out of shape. I stared at the screen, not knowing where to start from. So I lost hours looking for references, not knowing what to look for.

I researched and researched, read all about arctic bases in order to link those shapes to a function. I managed to take a deep breath and a step back, I broke the process into little steps and ended up with this:

I also threw some 3D in there, just to get even more confused.

While I was working at this beautiful centipede-building, I finally understood that I was thinking too much about function. And at the same time, the result was a bit ridiculous because of the shapes I had to stay faithful to.

I realized that maybe the only reference I needed, all along, was my first sketch. I looked at other artists’ works, and I understood that function should be suggested, but not described, so to speak. It shouldn’t get in the way of the original concept. Moreover, this was personal work, which meant I was wasting an important opportunity to have fun and experiment.

So I took all I did, threw it away and started again with another approach. First of all, what did I want to say with this image?

By this point, the CGMA online course had ended. But I wouldn’t let go of this messy painting until it was finished. So I kept working, on my own, on the variants I felt where more in sync with the mood of my original idea.

Then I got distracted for a couple of hours... maybe the new start got me carefree and hot headed, or maybe I just have a problem with horror vacui when it comes to color. Either way, it happened. It’s right there. Do you see it? The origin of my next series of troubles.

We are having technical difficulties

Fast-forward for several days and you get this:

Look at the moody lighting on the mountains, at the pleasant harmony of colors… kind of satisfied, I took a break from my detail marathon. That’s when I realized, with sudden horror, that this image didn’t work! I just didn’t know why, and didn’t know who to ask.

I had come across a Facebook group called “Aspiring Concept Artist Hub”. I decided to give it a try and ask for advice there, even if I was skeptical that it would help. But I was wrong and it proved to be extremely helpful. I was overwhelmed with feedback and the criticism allowed me to understand the main problems in this painting:

- The image doesn’t have a clear narrative. The building, the lighting, the environment and the details each seem to tell a different and conflicting story

- There is no clear focal point. The viewer’s eye goes to the arctic base, but then it is drawn to the smaller red building on the left and it ends up lost in the lighted mountains. Also, everything is too distant, there is no real protagonist in this frame.

Ironically, the last painting I had completed also had a focal point problem. That’s why I was trying my best to avoid a similar mistake. I had just reviewed how to focus the viewer’s attention on a specific part of the image.

Usually the focal point is:

- the area with the strongest value contrast

- where most of the details are

- different because of color and/or shapes

- where the lines in the composition guide the eye

But I guess applying the theory is harder than it sounds, and trial and error is the only way to really learn how to do this.

How one became two

I decided to split the painting. I isolated two of the narratives that I had mixed, and tried to better express them on their own.

Fast forward for several days again, and here are the truly finished results. The colors may have lost some of their appeal, but story and mood are more coherent.

After all the struggle, it was worth it. I was able to have fun painting again and ended up with two decent portfolio pieces.

What did I learn?

As a beginner, there is a moment when you understand that the professional level is not so far anymore.

In a way, this loads everything you do with much more pressure. Each painting must be the best possible investment, it must be the best you ever did. Why? Because you long for the day when you will finally have a portfolio worthy of attention. As you get closer, you get impatient.

But this is a risky way of thinking.

I know how to finish a painting (kinda), but I’m still very inexperienced. This often means that I end up working for weeks on paintings that are weak in their fundamentals. “Fail often, fail better”: it’s true. The craft of creating a powerful image or a good concept is way harder to learn, compared to that of creating a realistic-looking thing. So it’s better to invest in that, than in portfolio pieces that you will consider ugly in two-months time.

I also got to the conclusion that at first it’s best to work with concepts that require simple shape systems. In natural environments or primitive, “asymmetric” architecture, it’s easier to link form and function. Also, if you really want to finish the painting, it generally costs less time and effort. Always beware of over-finishing, it gets frustrating and kills the fun.

So, fellow strugglers, let’s persevere! Let’s have the courage to practice some more just for practice’s sake. Be patient. And if you mess it up, fight with it until you get your revenge.

Thank you for reading so far, and good luck on your journey!

Nice to meet you! I'm an Italian illustrator and self-taught digital artist, about to embark in a journey to chase the concept art dream! I'm also half of the indie game development duo Flaming Moka. 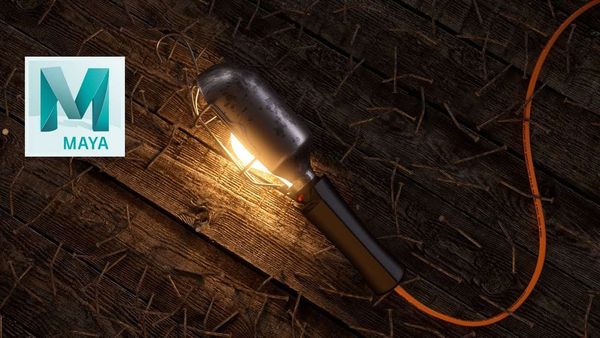 Looking to get started with Pixar's RenderMan [https://renderman.pixar.com/education] for Maya [https://www.autodesk.com/education/free-software/featured?src=rookiesedu]? In this tutorial series, Rusty Hazelden takes an animated shot from start to finish, and reveals all the techniques used to create the final animation with Pixar's

Hi! My name is Daniela.I’m a junior character artist and today I’m here to talk about my first big project, my Orc Warrior. I will go through all the workflow I used for this project, and the challenges I had in making a realistic creature. This character