Rookie Awards Entries That Prove Houdini is the Future of 3D

The Rookie Awards 2022 yielded some of the most amazing entries we have seen yet. In this article, we are sharing a selection of the best made-with-Houdini entries we've seen this year.

Known for fluid-like effects, environment art variety, and mind-blowing simulations, Houdini's innovations in procedural generation are proving that it is a VFX pipeline tool ahead of its time.

In no particular order, here are some of the best made-with-Houdini entries we've seen during this year's Rookie Awards.

EOS is one of the final graduation productions made by the Netherlands Film Academy VFX class of 2022. Hosted as a larger scale project to generate challenge, this production allowed the VFX department to delve into their craft. Additional help was given by the NFA VFX class of 2023, who supported the project as artists for about a month.

"Blog 22" is a graduation project created by Montasser Khalil at Sheridan College, explaining the emotions people can experience when not accepted socially. Whether in a relationship, friendship, or meeting a significant other's family.

"The Shining Tribute" is a Graduation project created in 2022 by Jonathan Truong, at VFX-Workshop, and pays tribute to the Movie "The Shining" by Stanley Kubrick.

Entry for the VFX category in the Rookie Awards 2022. Life In Ruins is the story of a shrine unforgiven by nature itself! Entirely built in Houdini. Compositing done in Nuke.

A Love Letter To Sci-fi

"Sometimes, people never really grow up. I'm proud to say I'm one of those people. I live my days dreaming about robots, lasers, and outer space. I hope to ignite the same child-like inspiration in you as I had found while creating these pieces. Here's my favourite work I created in during my time studying at Gnomon."

Interested in creature design, these are a selection of works done by Flore Argentieri during her time at ArtFX.

Three months of hard work and many simulations later, this is Jacobo Ortuño Montel's entry to the Rookie Awards 2021.

This graduation project was made at New3dge school from September 2020 to June 2021 with a team of six artists: Elisa Bernon, Fabien Burger, Steven Deutsch, Alessia Malatesta, Livia Pilant and Maël Villa.

Pixl Visn student, Jakob Klauenberg, decided to create a project to submit to the Rookies Contest which tested his sculpting and grooming skills; choosing the giraffe as the hero because of its unique proportions.

"These are my favourite pieces that I completed during my first year at Gnomon School of VFX. I love to create cinematic environments and problem solve in clever ways. The scope of these projects ranged anywhere from modeling and texturing, to scripting and scene optimisation."

This is one of the projects made by the Netherlands Film Academy VFX class of 2022. As an alien finds its way through a gigantic dam, it gets confronted with the ways of humanity. Will it fight back?

This is a group project that was made over the course of 12 weeks at Howest University of Applied Sciences - Digital Arts and Entertainment.

Tamandua is a CG/VFX Short from students at the University of Hertfordshire: Joshua Hockey, Nicola Petch, Lewis Reynolds, Josefina Sales Ramirez and Ivaylo Yanev. This short film follows the journey of a curious lesser Anteater looking for his next meal, with surprising results.

This entry from Roberto Denches is based on a scene from the end of the 8th Star Wars movie where, fighting on a planet of red salt, the destruction effects generated red elements that dyed the entire scene.

Before dawn, a strange character born from the sky crashes into a desert. Awake and vulnerable, he struggles to return to the highest point in the sky while facing an awakening earth. Yet in his frantic ascent, something happens under his feet… 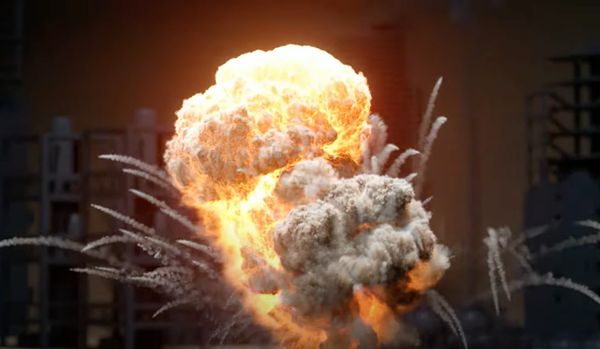 The power of Houdini's procedural system that empowers artists to work freely, create multiple iterations and rapidly share workflows is being clearly demonstrated by aspiring artists on The Rookies. Check out these inspiring projects!